Revival of the east side: Another step 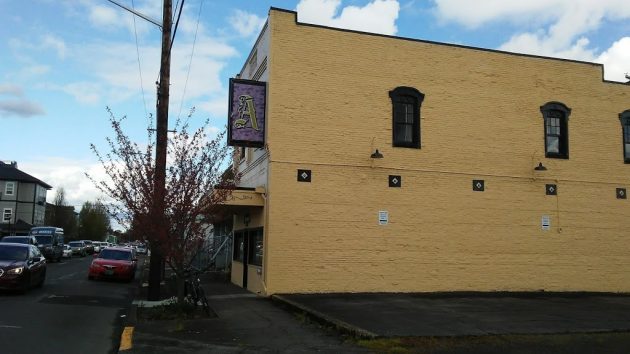 The Schultz Building on East First Avenue, shown on April 12, may house a “gluten-free” restaurant, according to plans presented to the city.

The Schultz Building at 212 First Ave. S.E. has seen various uses since being built in 1910. Now it may become a restaurant, according to a grant request being considered by the Albany urban renewal district.

I wrote about this building a year ago after seeing a couple of beautifully restored American muscle cars displayed behind its ground-floor windows. You can read the story and subsequent comments here.

On Wednesday, the Central Albany Revitalization Area will take up a request by Shawna Turkins, who in 2016 opened Homegrown Oregon Foods, a gluten-free commercial kitchen now housed inside the Marrakesh Salon at 229 Fourth Ave. S.E. She has a five-year lease on the ground floor of the Schultz Building, wants to move her operation there and open a restaurant, and intends to buy the property before the lease expires.

Turkins is asking for a $15,000 CARA grant to cover about 15 percent of the cost of the first phase of renovations to turn the first floor into a restaurant. She has private funding and a bank loan for the rest, according to a CARA staff report, which recommends approval of the grant. The money would come from CARA reserves now totaling $1,490,000.

According to the staff report, the restaurant project meets CARA goals, which are to revive the old part of town economically by, among other things, preserving historic resources and utilizing vacant properties. Some years ago, a CARA grant helped the building owners remodel and renovate the upstairs apartment.

Next door, Lepman Properties continues working on the renovation of The Spruce apartment building, without CARA involvement. When that project is done and the Schultz Building contains a going business, the east side of downtown will no doubt look and feel significantly revived. (hh)


11 responses to “Revival of the east side: Another step”