Restroom outside depot: Still in the works 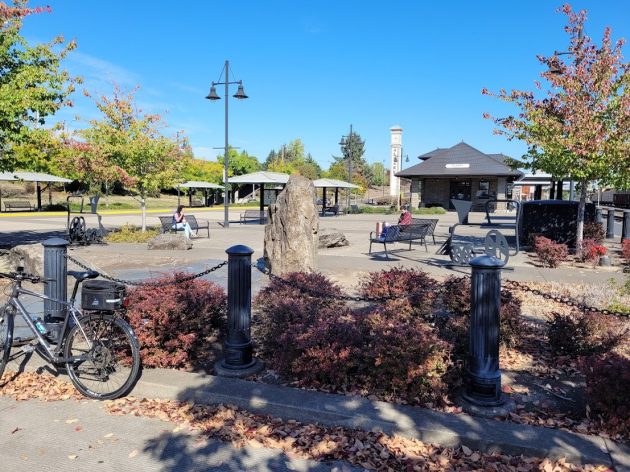 Albany Station on Oct. 2: There are plans to build a public restroom somewhere on this plaza.

When I passed Albany Station on my bike ride Saturday, I remembered the talk some time ago about building a public restroom outside the city’s depot building. Whatever happened to that idea?

It hasn’t been forgotten, I learned Monday.

It was in late 2019 when the city staff and ODOT brought up the idea. This was in response to the fact that the Amtrak ticket office and waiting room, including the restrooms there, were not open at all times when buses and trains were stopping at the station.

In January 2020, the city council voted 6-0 to seek a grant of $164,800 from the Federal Transit Administration. The money was to be used to pay for designing and building the outside restroom, and to maintain it for a year.

That’s the last we heard about this — until I asked about the status over the weekend.

“We did receive a grant for this project,” Albany Public Works Director Chris Bailey told me in an email Monday. “It is in the design and permitting phase.”

She said there’s no firm date for the planned construction, but unless there are “further delays” it should take place in the summer or fall next year. The plan is to place the new facility in the concrete plaza southwest of the depot building.

Why the delay so  far?

“ODOT Public Transit is working the application through the state and federal offices that have to approve it before it can be built,” Bailey wrote. “Because it’s a federally funded project, the paperwork process is a little longer than our typical design and construction timeline.”

With state and federal offices involved, construction in 2022 might be optimistic. So until further notice, the current advice is this: The trains may be late, so if you go to the station to pick someone up, better go before you leave the house. (hh)


4 responses to “Restroom outside depot: Still in the works”