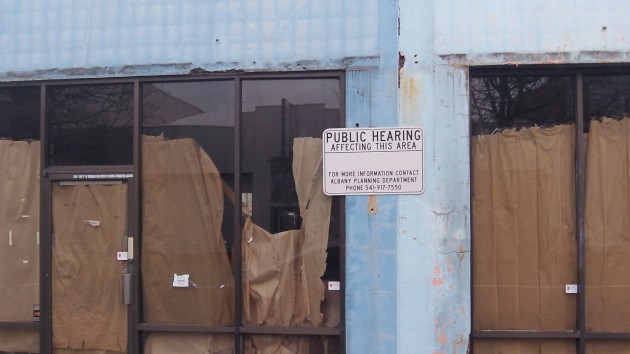 This is the “before” photo. Wait for “after” when the Century Building is restored.

You’re looking at part of the front of the Century Building in downtown Albany, at 117-123 First Ave. N.E., and it won’t look this shabby for long. According to plans reviewed by the Albany Landmarks Advisory Commission on Tuesday, it’s about to be restored to its former glory.

Well, glory might be the wrong word. The building was constructed in 1905, with a restaurant and barber shop on the ground floor and a hotel named Mabel’s upstairs, and the report to Landmarks said the hotel was reputed to house, ahem, a house of ill repute.

The hotel was destroyed by fire about 1940 and replaced with a roof to yield a one-story building. The report to Landmarks on the condition of the building and plans to fix it up said: “In some places three ceilings were removed to discover the still existing second ﬂoor of ‘Mabel’s’ and bright pink ﬂoral wall paper that suggests the rumors might be true.”

Last June, current owner Rick Mikesell got approval of a 20-year Albany urban renewal loan of $500,000 toward completely restoring the building, a project he estimated at the time to cost around $1.2 million. Judging by the report to Landmarks on the sad condition of the structure’s exterior, I would not be surprised if the restoration ends up costing more. Some of the windows and exterior doors were found to be beyond saving, but according to architect Bill Ryals, every effort will be made to restore what can be salvaged and replace the rest with materials as close to the original as possible. (hh)

As for the details of the restoration, the Landmarks staff report sums it up: “Alterations are proposed on the north, south, and west elevations. Alterations to the south façade include removal of the c. 1970 metal “cheese-grater” siding; replacement of the c. 1970 aluminum storefront with a wood sash storefront; repair and replacement of stucco finish on the fascia and the addition of a reinforced plaster cornice, pilaster capitals, and medallions; cultured stone pilaster bases; and steel awnings with lighting and sign supports. Alterations to the north and west elevations include replacement and restoration of existing windows and doors within the existing openings to match or be similar to the original 1905 or 1940’s appearance, and the addition of lighting and signage.”


7 responses to “Restoration downtown: An update”