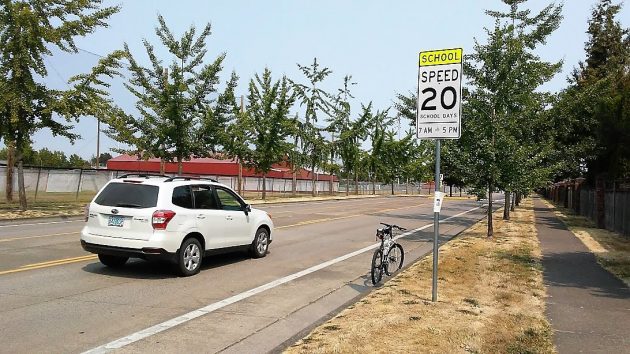 When Diane Conrad asked the Albany City Council to remove a 20 mph school zone, she probably spoke for many motorists. The zone on Southeast Waverly Drive disrupts traffic but isn’t needed for safety, she argued, and she asked the city to remove it.

Conrad, a resident of the Mennonite Village retirement community off Waverly, went before the council Wednesday with a well prepared and persuasively argued case. You can see her address to the council under “business from the public” by going to the council’s Aug. 8 meeting on cityofalbany.net, or by watching the meeting on TV (Comcast Channel 28 in Linn County, 23 in North Albany) at 7:30 every night until the next meeting.

The speed limit on that segment of Waverly is 40 mph. But from 7 to 5 on school days, it’s 20 mph where the street runs past the football field of South Albany High School. The gist of Conrad’s argument was that the layout, including a 6-foot fence between the school grounds and the street, and a designated crosswalk with user-activated lights, made the speed zone unnecessary.

“I believe removing the school-zone traffic signs on Waverly Drive will not cause an unsafe condition for students,” she said, “and will actually allow the drivers of Albany a safer traffic pattern of constant speed on this straight part of Waverly Drive.”

The same could be said for other school speed zones that force traffic on main thoroughfares to slow down even though students are safely ensconced in their classrooms and no children are anywhere in sight.

The council did not react to the request. City Manager Peter Troedsson told me later the city staff had talked about this over the past two months with Conrad, with ODOT, and with South Albany High. “They do not support the idea of removing the zone,” he said of the school.

“In short,” he said, “pending further direction from the council, staff have nothing further to explore.”

School starts again on Sept. 4. Get ready for sudden slowdowns on Waverly and elsewhere, whether it’s necessary or not. (hh)