Request: Angled parking on one block of Fourth 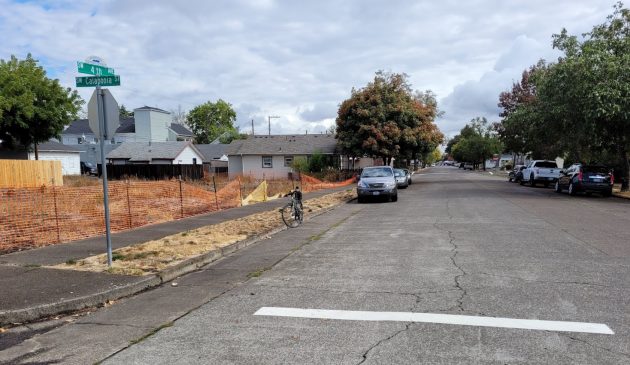 Looking east on Fourth Avenue from Calapooia Street on Saturday. Angled parking has been requested on the left side.

The last we heard about a plan to build eight apartments on Fourth Avenue at Calapooia Street was in May, when the Land Use Board of Appeals ruled in an appeal to block the project. Now the builders are back with a request to make this one block of Fourth one-way west, with angled parking on the north side.

On Monday, the Albany City Council will be asked to consider the idea. The city staff wants to know whether it should “engage in further discussion” with the builders, Mark and Tina Siegner, about their angled-parking request.

Their proposed design turns the block into a one-way street with diagonal parking on the side of their proposed development. Parallel parking would remain on the other side, and there would be a two-way bike lane.

On their Fourth Avenue property where the council previously approved demolition of three dilapidated historic houses, the Siegners proposed to build two three-story buildings with a total of eight two-bedroom apartments and, on the street level, commercial space.

The Albany Landmarks Commission said no, but on appeal the city council approved the plan in June 2020. Friends of Historic Albany and an individual, Camron Settlemier, appealed to the state, and in May LUBA remanded the case to the city, citing procedural errors.

The city has done nothing about the remand, apparently waiting for the Siegners to make the next move if they want to go ahead with their project.

Architect Bill Ryals, who designed the buildings, also drew the proposal for the one-way street. The staff memo to the council is silent on whether going ahead with the building project depends on the street and parking changes being approved and carried out. (hh)

Postscript: On Sept. 20, the council put off consideration of the request until Oct. 13, when it will take up the LUBA remand of the Siegner development plans. 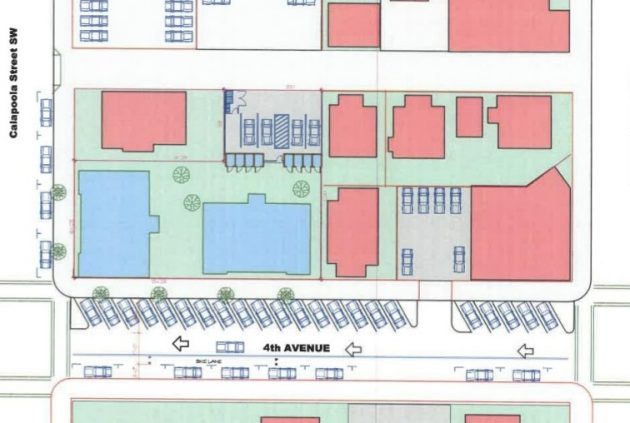 The council’s Monday work session agenda includes this drawing of the proposed changes.


5 responses to “Request: Angled parking on one block of Fourth”