Repeated chore: Rubbish on the river 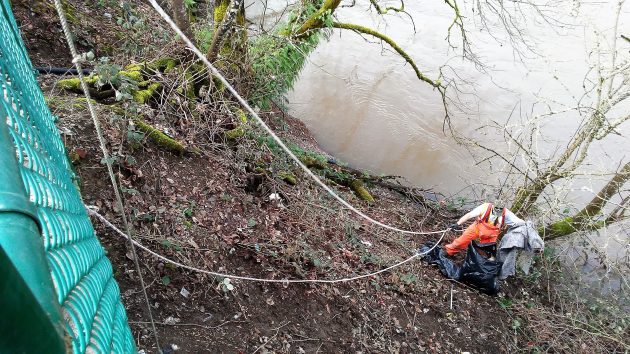 Wayde Burrese of the parks department scours the steep riverbank on Thursday.

While the eyes of the world were on the change in U.S. administrations, the Albany parks department was dealing with a more mundane but all too real issue: People camping under a segment of the Dave Clark Path keep fouling the Willamette riverbank below with their leavings, and from time to time the parks people have to clean up.

I came across one such operation on Thursday. Parks employee Wayne Burrese was scampering along the steep terrain, gathering discarded blankets, garments, plastic sheets and other trash. He was tethered to the path above to keep him from landing in the river if he slipped. On the path, a couple of colleagues helped by hauling up what he collected. 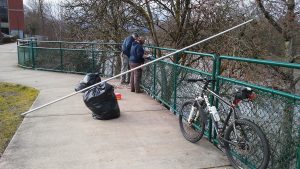 Rick Barnett, the parks operations supervisor, told me that trash on the riverbank has been a frequent problem. The junk is left by people who camp under the concrete path where it cantilevers out over the riverbank, east and west of where Jackson Street dead-ends on the Clark Path near the Wheelhouse office building.

In August 2014, a homeless woman’s body was found underneath the path, apparently dead of an accidental fire. In response, the city posted signs trying to keep people out of the riverbank, but it didn’t work.

Now the parks department is exploring what it would cost to build a fence under the bank. A contractor looked at the area Thursday to give the department an idea of the potential cost before the city calls for bids. The estimate was not yet in, but Barnett told me a fence would not be cheap. The posts would have to be closer together than customary in order to make the fence effective, and in places the void is 13 feet tall.

Homeless people would not have to seek shelter under the riverside path. They could stay at the Helping Hands shelter instead, but then they would have to stay sober and obey the rules. (hh)


16 responses to “Repeated chore: Rubbish on the river”