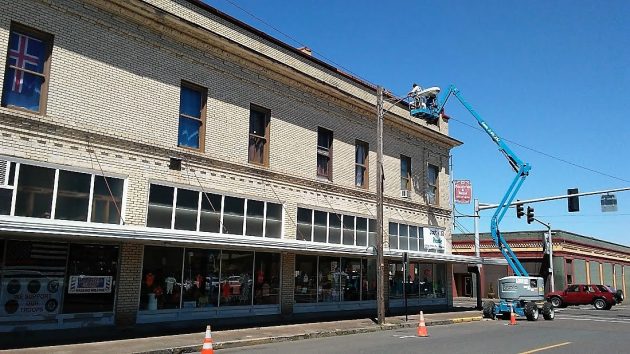 Workers started on the top of the Knights of Pythias Building on July 8.

Structures in downtown Albany are getting dressed up this summer with urban renewal help from CARA, the Central Albany Revitalization Area.

Last weekend I noticed that work had started on the facelift of the Knights of Pythias Building, 230 Lyon St. It was back in February that the CARA advisory board and city council, as the Albany Revitalization Agency, approved a $10,000 grant toward what was expected to be a $25,000 project. The building dates from 1913, and owner Daren Clowser wanted to have the exterior, including the historic windows, repaired and repainted.

The project was approved under CARA’s storefront revitalization program.

On Wednesday (July 19), CARA will consider another storefront restoration, this one at Hasty Freeze, 655 Lyon St. Owner Tony Pope is asking for a $10,000 grant to help pay for $21,445 in planned improvements to the iconic hamburger stand. The description with the CARA agenda mentions fixing the roof and “removing the overhang.” I’m hoping they don’t remove the overhang under which, while waiting for my order, I used to seek protection from the winter rain.

Also on Wednesday’s agenda, there’s a request by Sid Stevens, co-owner of the Bikman Building, for $1,281 under CARA’s small-grant program. The money would cover half the cost of replacing the cloth awning at the Little Wuesten Café, 115 Ellsworth St. (The name is based on the town in Germany where the café’s proprietor is from, his wife once told me.)

Last month CARA supported another project in the Bikman Building. The advisory board on June 21 approved a low-interest loan of $10,000 to help Klint Sheets, a Lebanon police officer, open a brewery business in a vacant storefront on the First Avenue side of the building, at 136 First E.

So, bit by little bit, the revitalization of downtown Albany marches on. (hh) 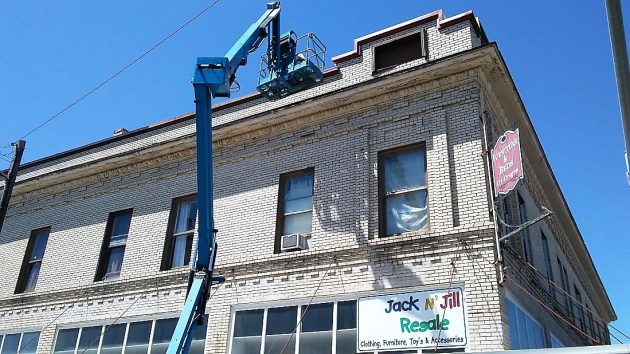 Reaching high at Third and Lyon as the Pythias Building gets dressed up.


5 responses to “Repairs and paint downtown”