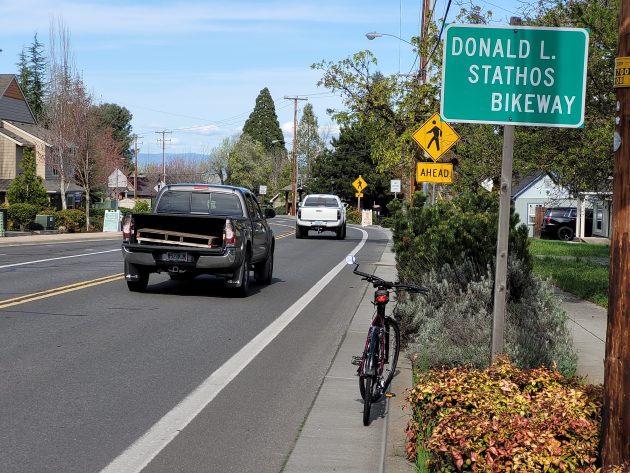 Several times since 2012, I’ve paid tribute in this space to the late Don Stathos, father of the Oregon Bike Bill. And it’s that time again:

In Albany, getting around town on a bike is pretty easy, largely because of the kind of improvements Stathos envisioned, such as lots of bike lanes. But on the big arterials (Santiam and Pacific Boulevard, mainly), using the bike lanes takes a certain amount of confidence that drivers behind you are paying attention and staying in their lanes.

Still, with a change here and there, “active transportation” (which is what they call bicycling now in parts of the bureaucracy) could become even easier and therefore more widespread. Maybe.

Here’s one idea for a simple improvement: Run the city street sweeper down those main boulevards now and then, or more often. Sometimes it looks like the debris in the bike lanes has been piling up for  weeks.

Another: If you’re going to run errands on your bike, you’ll need racks outside popular businesses where you can lock your ride for a few minutes. Some businesses have them. I wish more did.

Yet another: How about placing delineators (those little bendable white posts, spaced a few yards apart) to separate the bike lanes from traffic lanes on South Pacific Boulevard, where the speed of motor traffic routinely hits 50 mph or above.

Maybe Albany’s Bicycle and Pedestrian Advisory Commission will consider these and other steps, and then “advise” the council to take them. Money should be no problem, with all the federal infrastructure cash sloshing around. Just now, more funding was announced coming from the state.

The bike/ped commission may be folded into a reorganized city Transportation Commission soon. At least that’s a proposal before the council. If it happens, the panel will need some actual tasks to keep it busy, and working on these ideas would be a start. (hh)