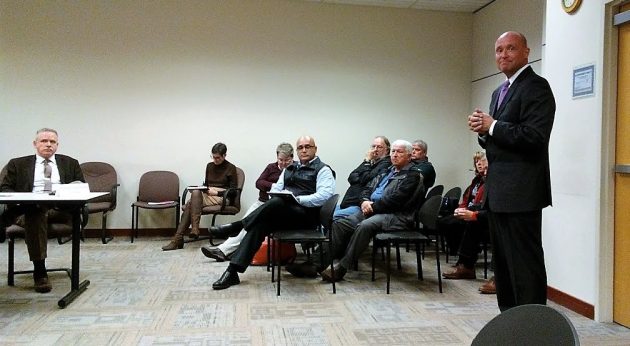 Greg Smith, standing, briefs the Albany council and others Monday about the Millersburg multimodal project.

Greg Smith, a business development specialist from eastern Oregon, has been hired by the Albany-Millersburg Economic Development Corporation to manage its effort to launch the reload center on the property of the former Albany Paper Mill, which was closed and demolished by International Paper a few years ago.

Smith briefed the Albany council Monday. He’ll submit an application by the Dec.15 deadline and said he was “very confident that the project will move forward and will be done correctly.”

He also mentioned possible competing proposals, one from Lebanon and the other from the Eugene-Springfield area. He didn’t go into detail on either.

The 2017 legislature authorized $25 million in lottery-backed bonds to develop a reloading center — from trucks to trains and vice versa — in the mid-Willamette Valley. State Rep. Andy Olson, R-Albany, advanced the idea of using the vacant acreage of the former paper mill, ideally situated on I-5 and two main rail lines, the Union Pacific and the BNSF (operated by the Portland & Western).

Smith said he had obtained letters of support or cooperation from rail and shipping companies, and expressions of interest from potential operators of the reloading yard. He also said Linn County had stepped up to secure the real estate. I asked Linn County Commissioner Roger Nyquist about that, and he said the county was “in negotiations to secure the property.” Nyquist also said Lane County supports the Linn project and he was unaware of any competing project in the Eugene area.

If you want more and have good ears, you can listen to a recording of Smith’s presentation on the city’s website here. (It starts just before the 40-minute mark.)

Smith runs a business development company with offices in several central and eastern Oregon towns. A Republican whose home is in Heppner, he’s also the state representative for District 57 in northeast Oregon.

He told the council Monday that the reload yard could be built and operated “without impacting traffic in a negative way,” and he asked for Albany’s support. The council may act later. But Mayor Sharon Konopa warned that the reloading project should not cost Albany anything for transportation improvements or anything else. (hh)