Relic of video-store era will vanish 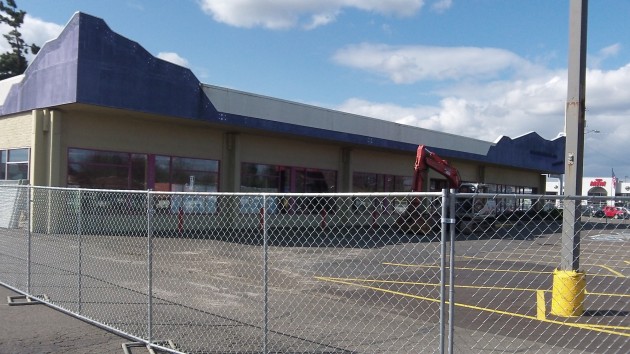 Now you see it; soon you won’t.

Here’s an update on the Albany scene, literally the scene. Pretty soon there will be nothing but empty space where the former Hollywood video store sits on Santiam Highway.

The video company folded several years ago, and the building has sat unused for most of the time since. Most recently it was used as a shop and storage area for last year’s big remodeling job at Fred Meyer, which owns the property. Yesterday I saw new construction fencing all around the old building and a big piece of earth-moving machinery parked inside the fence, so I figured something was about to change.

I asked Albany Building Official Gary Stutzman, and here’s his reply: “Fred Meyer has obtained a demolition permit. They have stated they have no plans for the lot but intend to plant the space to grass. Currently working on removing gas and electrical connections and will follow with the building removal shortly.”

Just another sign, if we didn’t know it already, that the video-rental-store era is over. (hh)


2 responses to “Relic of video-store era will vanish”