Reflections on a roadside litter walk 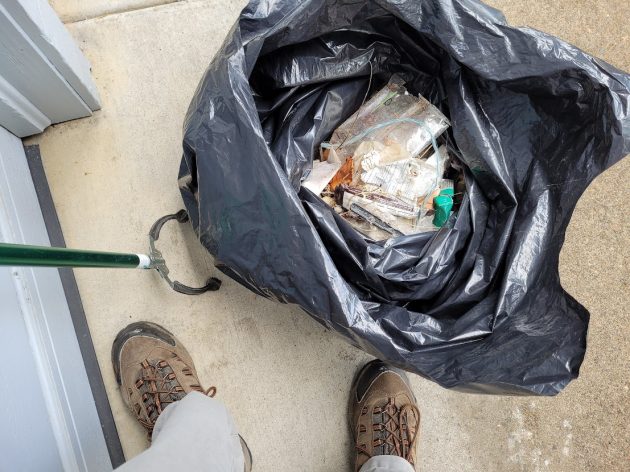 One 20-minute walk in rural North Albany yielded this haul of roadside trash.

If you don’t like all the trash littering our rural roads, there’s something you can do. You can pick it up.

I often wonder what prompts people to open their car windows and toss out stuff. Maybe they count on nature to get rid of it, somehow.

More likely, though, they just don’t think about it. They get a soft drink on the way home, and when they’ve slurped it up, down comes the window and out go the cup, the plastic lid and the straw as well.

That explains all the cups from fast-food drive-throughs. What about the other stuff? The bits of plastic string, the wads of paper big and small, the empty pack of Marlboros?

It’s possible that some of the paper may blow out of the open backs of garbage trucks. I once waived down a Republic Services truck after watching pages of paper flutter out of the top for half a mile. The driver said there was nothing he could do. After all, there has to be an opening on the top that trash cans can emptied into.

But most of the trash I picked up the other day did not look like having been dropped accidentally.

Regardless of how it got there, most of that stuff looked like it would not decay on its own for a long time. And it won’t pick itself up. So if we want to see less of it on our roads, it’s up to us, every once in a while, to pick it up, take it home in a big plastic bag, and stuff it in the trash. (hh)


18 responses to “Reflections on a roadside litter walk”