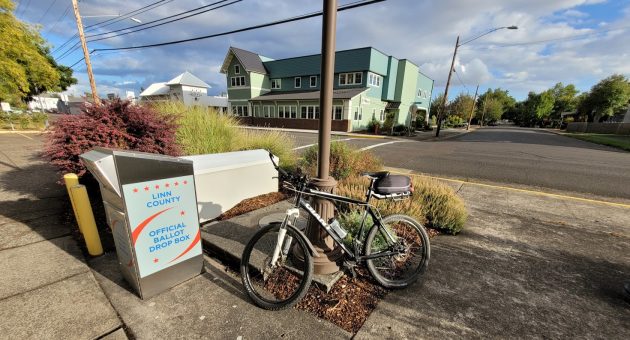 The ballot drop box outside the Linn County Courthouse on Sunday. (In background, ABC House.)

Oregon voting districts are being redrawn this year. The job is loaded with politics because of Reynolds v. Sims, the 1964 Supreme Court decision that declared the equal protection clause demands that state electoral districts be as close to equal in population as practical.

To create such districts invites creativity, and politicians in power use it to make sure they and their party stay that way. (And who can blame them?) That is why Democrats in the legislature have drawn up maps that have three or four of Oregon’s six congressional districts taking in parts of the Portland area, where Democrats have a huge registration edge.

Districts for state House and Senate positions also are being changed. The 15th House district, for example, which takes in Albany and environs, is proposed to be extended northward into Marion County.

Is all this rearranging of state electoral districts necessary? Only because of the Sims decision.

The Sims case arose in Alabama, where one district in Birmingham had more than 40 times the number of people of a rural one. The plaintiffs argued this robbed them of a republican form of government. The court agreed with them and ruled 8-1 that grossly unequal districts violate the equal protection clause of the 14th Amendment.

Chief Justice Earl Warren wrote that the Constitution demands “no less than substantially equal state legislative representation for all citizens.” He said the right to direct representation was a “bedrock of our political system.”

If that’s so, what does the Constitution say about one-party governments like Oregon’s, where almost half the people have no representation at all because of the way a system based on carefully gerrymandered single-member districts works out?

Oregon used to have a different system of apportioning the number of legislators across the state according to population. When I started working in Oregon in 1967, the old system was still in place. I can’t remember exactly how it worked, but this may be deduced from the published returns.

The reporting, sketchy as it was, suggests that elections followed county lines. This would have made sure office holders were closer than now to the people they represented, and it avoided redrawing lines for partisan advantage every 10 years.

Too bad Earl Warren and seven of his colleagues on the court did not foresee in ’64 that their decision would make fair representation in state politics not more likely, but less. (hh)

Postscript: On Monday the Senate passed the Democrats’ plan for new districts. In the House, the speaker appointed more Democrats to a special committee on redistricting, making sure the committee, previously evenly split with three Ds and Rs each, will pass the Democrats’ plan.

Correction: The story has been edited to take out a mistake I made in describing he changes in House District 15.