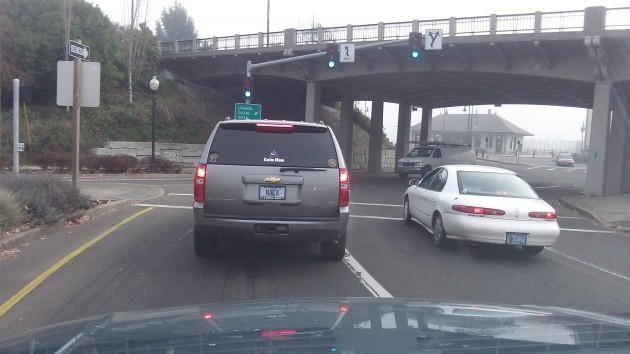 Cross traffic in the underpass as Ninth Avenue has a green light.

I’m developing what may seem like an unusual fascination with a set of traffic signals in central Albany. These are the lights that regulate traffic through the underpass under Pacific Boulevard at Ninth Avenue and Lyon Street. Years ago, a man from out of town got a ticket there for running a red light. He insisted he had a green light, but he lost in municipal court and again when he took his case to circuit court.
He got the ticket because an officer was on Ninth Avenue, where the light had just turned green when the guy came through the underpass. If one set of lights is green, the signals for cross traffic must be red, right? So the cop reasoned. But in the years since then, I have often had a green light on Ninth when traffic is still coming through from the other side, especially when traffic from Pacific to Lyon is heavy.
So either all those drivers — like the one in the photo above, taken the week of Nov. 25 — are running red lights, or they go through well after the signal on the Pacific side has turned amber, for which they can’t be blamed considering the long wait they otherwise face.
So far, I’ve heard of no collisions beneath the underpass.  But sometimes it looks like a close call. Maybe the city or ODOT had better take another look at the timing of those lights before there’s a crash or somebody else gets a ticket he may not deserve. (hh)


One response to “Red-light runners? Maybe not”