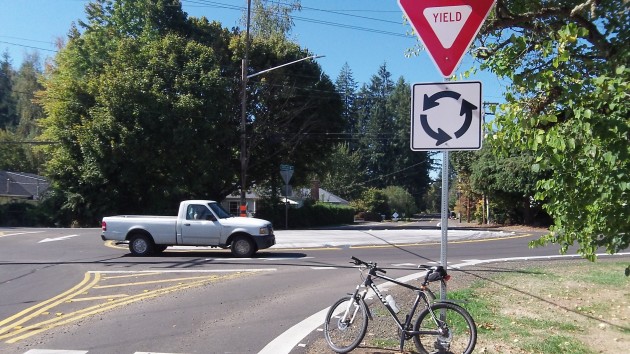 The traffic oval at Spring Hill and Quarry Road.

The Benton County Public Works staff has reviewed the small oval “roundabout” at Spring Hill Drive and Quarry Road and is now recommending that it be removed and not replaced with a bigger one that is actually round. North Albany resident Chuck Kratch had been asking for just that.

Kratch gathered 182 signatures on a petition he presented in September, first to the Albany City Council and then to the Benton County Board of Commissioners.

Benton Public Works Director Josh Wheeler has forwarded his recommendation to both governing boards and says he expects the city council to consider it next week and the commissioners to do so soon afterward. (I had asked him to keep me posted, and he sent me a copy this morning.) In an email to Kratch, Wheeler wrote: “In this case, staff had already started looking at the intersection prior to the petition but staff agrees that the intersection should be changed back to its original configuration.”

The traffic oval was installed this spring to handle detour traffic on Quarry Road during the reconstruction of North Albany Road, now completed except for “bioswales” to catch rainwater. The oval was supposed to be temporary, but the council asked the county to keep it in place as a way to slow traffic on Spring Hill. The commissioners at first agreed.

But as a long-term feature the oval would have to be replaced with a larger circle. This, Wheeler says, would cost about $500,000, and spending that kind of money there would prevent county road and bridge work  elsewhere. “We feel road maintenance and bridge replacements are higher priority than the roundabout,” he wrote.

The intersection has had no problems with accidents or congestion that would warrant a roundabout. And while the oval reduces speeds, Wheeler wrote, “the reality is that speeds, while dangerous, are not causing accidents on this section of Spring Hill.” He also believes a bigger roundabout would reduce property values on its southwest side.

“For these reasons,” he wrote, “county staff does not recommend keeping the intersection as is and instead (recommends) putting it back the way it was as a two-way stop east-west on Quarry and a through road on Spring Hill.” (hh)

The original story has been amended to add Wheeler’s statement that the county staff had started reviewing the issue even before Kratch submitted his petition. (hh) 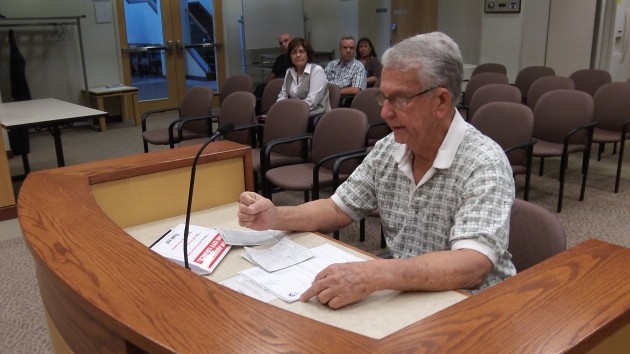 Chuck Kratch presents his roundabout petition to the Albany council on Sept. 9.