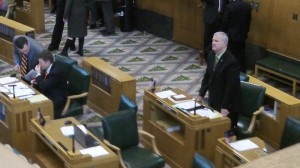 Because an Albany businessman got an undeserved ticket, Oregon’s law on being able to see through the windows of vehicles will be clarified. On May 13 the state Senate approved, 28-1, House Bill 2406, which previously had unanimously passed the House.

Sponsored by Rep. Andy Olson of Albany, the bill removes the current ban on covering up the rear window of vehicles. Olson told House and Senate committees that the owner of an Albany business, Xtreme Grafx, got a ticket in Salem for a sign in the back window of his rig.

The owner, Art Meeker, testified that the kinds of signs he applies to rear windows are perforated so they don’t interfere at all with vision from inside the car. And Olson said the law as it relates to rear windows has been interpreted in different ways for years. Some cops will write a ticket for what others think is no violation at all.

This bill drops rear windows from the law altogether. This makes sense. As Meeker told legislators, some vehicles have cargo or other items that make it impossible to see out the back. And some vans don’t have a rear window at all. So why write  tickets for having a rear window, even if you can’t see out of it?

This bill is no big deal. But it shows a big principle: If you think a law is wrong, you can get your legislators to make a change. (hh)

Ted Salmons responded on May 12: Rule number 7. Any law or regulation that is written vaguely enough that it CAN be interpreted WILL be misinterpreted. And quite often the only people that win in these situations are the lawyers.