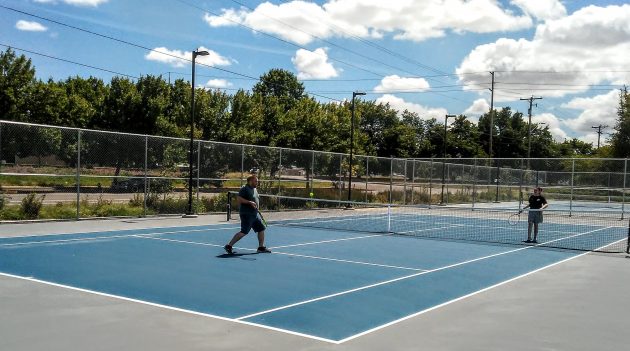 Douglas Howard and his daughter, Amanda, try out the new tennis courts at West Albany High School on Saturday.

The $62 million expansion of West Albany High School is far from being complete, but the tennis courts are ready for use, as I noticed today when I saw a couple of players trying them out.

The four new courts, at Elm Street and 24th Avenue, replace the ones taken up by the construction of an auditorium and auxiliary gym on the other side of the campus.

There are still locks on some of the gates. But two residents of the Broadway Neighborhood, Douglas Howard and his daughter Amanda, found an open gate and were using one of the courts when the bike and I happened to come by. They usually play on the tennis court at Henderson Park on Calapooia Street. Doug told me they like these new ones just fine.

Being outdoors, use of the courts would seem to be unaffected by restrictions intended to slow the spread of the new coronavirus and the disease it causes, COVID-19.

The epidemic has caused Albany schools to decide that once school starts on Sept. 14, instruction will be “all virtual” and remote until at least Oct. 19. And unless the state decides it’s safe enough, it’s conceivable that there will be no regular in-person school attendance all year.

The construction schedule for West calls for the school to occupy the new facilities, including the auditorium and a capacious commons, on Jan. 1, 2021. The latest report to the school board on Aug. 3 said there had been delays. But if the corona situation persists or gets worse, construction delays don’t really matter because students won’t be there.

With luck, none of that should matter concerning the tennis courts, which are finished now and, as you can see, ready to be used, if not by high school tennis classes then by taxpayers who are helping to pay the cost. (hh)


One response to “Ready and used: West Albany’s new courts”