Rambling while watching a freight roll by 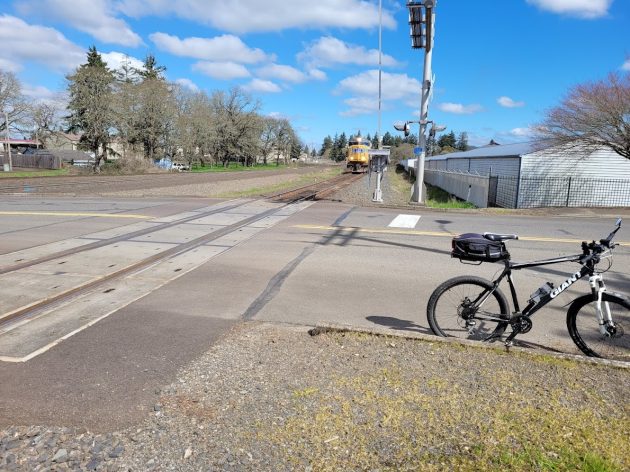 This is probably getting old for some of you. But not for me. When I’m on the bike and meet a train at one of Albany’s many grade crossings, I just have to take its picture.

Or a short video, as you can see below:

As you know, three railroad companies operate in Albany. The Union Pacific is, of course, the biggest. In fact it’s the largest railroad in North America, operating in 23 states across the western two-thirds of the United States.

The others are the Portland & Western, headquartered in Salem, and the Albany & Eastern, based in Lebanon. The Albany & Eastern runs, besides its freight business, weekend excursion trains between Lebanon and Sweet Home. Check its website for the schedule.

As for the UP freights we see hurrying through Albany on their way north or south, what are they carrying when they aren’t pulling empty cars as in the video above?

Most of the time the observer at the crossing cant tell what’s in the box cars. On its website, though, UP summarizes the stuff it shipped to and from Oregon in 2020.

The top five commodities shipped out of Oregon were cement, roofing and miscellaneous materials; frozen and refrigerated goods; intermodal freight (meaning the rail cars carried trailers full of whatever); lumber and building materials; and paperboard and printing paper.

As for the freight carried into Oregon on UP trains, the top categories were autos, fertilizer, intermodal again, recyclables and municipal waste, and soda ash.

Wait. “Municipal waste?” You mean the UP brings trash to Oregon for disposal?

That’s a topic for another day, but it gives me an idea. Instead of expanding the Coffin Butte landfill, a controversial subject in Benton County, how about shipping our trash somewhere else by rail? (hh)


9 responses to “Rambling while watching a freight roll by”