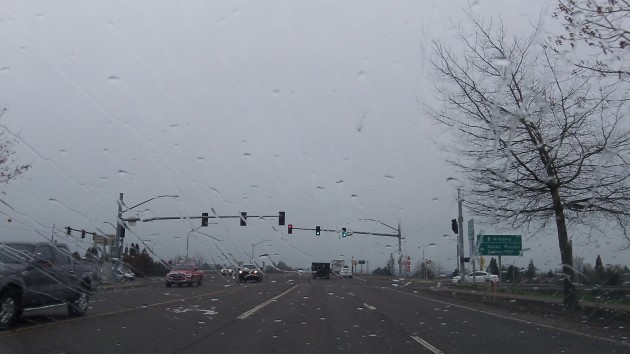 The Albany rain tax would not be charged against highways or streets, the city staff suggested.

Nobody can yet say how stiff Albany’s rain tax will be. But in Oregon cities that already have one, the average is just under $9 a month.

The city council went through another two-hour work session on the proposed “storm water utility” Monday, following a carefully prepared outline of points to be considered before the new charge is imposed, probably in March 2017. (The city spells it as one word, but my computer insists there’s no such word as “stormwater.”)

Mark Yeager, the city’s utility rate engineer, resolutely deflected council requests about how big a jump in monthly bills Albany’s roughly 17,500 utility customers can expect. This will depend mainly on the amount of revenue the city will need to meet new regulatory requirements and make improvements to the storm drain system, which is separate from the sanitary sewers and carries untreated water to the river.

After the meeting I asked Mark to give me an estimate. He couldn’t, but he said among Oregon cities with storm water fees, the charges vary widely and the average is about $9.

The state Department of Environmental Quality is developing new rules on discharging storm water. And Albany for the first time will be required to get a DEQ permit for its drainage system. Councilors Floyd Collins and Bill Coburn asked for changes in a draft ordinance to reflect that the new charge is being set up largely because of these additional state rules. Collins and Councilor Rich Kellum say they want the city to push back against state regulations that go beyond what is required under the federal Clean Water Act.

No decisions have been made on anything. But among other things, the staff is suggesting that the rate be based on an “equivalent residential unit,” that residences be charged in a tiered system based on the amount of impervious surface such as roofs and driveways, and that unimproved lots not be charged at all. Publicly owned properties such as schools and tax-exempt properties would be charged. So would properties discharging directly into creeks.

The staff’s schedule — and the council so far has shown no wish to deviate from it — goes like this: The storm water utility ordinance will be on the agenda for council action March 23; revenue needs will be reviewed April 11; and more money discussions will be had on May 9 and June 6.

The council and staff plan to sponsor all kinds of public “outreach” efforts to explain the new fee program. Rates then would be set in December and become effective next March.

I had the thought that the council could sidestep this elaborate process, which started a year ago, if the city simply figured out what needed to be done with runoff — especially in view of the DEQ’s tightening grip — and jack up the sewer rates accordingly. The explanation and the expected public outcry would be the same. But no new utility would have to be created. And I wouldn’t keep calling it a new tax on rain. (hh)