Rain and tax talk arrive together 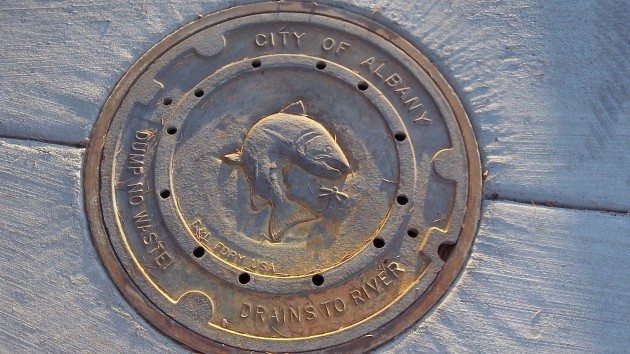 One of the newer ones among Albany’s 2,200 stormwater manholes.

The rainy season has started and, as though on cue, the Albany City Council is taking up consideration of a tax on rain. But before such an added tax is enacted, second thoughts are in order.

The council is being asked to consider a “stormwater user fee,” a misleading term since it implies that people would be charged for using rainwater. The opposite is the case. They would be taxed for getting rid of rainwater.

What we’re talking about is a tax to pay for repairing, maintaining and improving the city’s storm drains and also to meet new rules handed down by the state. The issue is on the agenda when the council meets for a work session at 4 p.m Monday, Nov. 9, at City Hall.

The council has had four briefings from the public works staff this year on the city’s stormwater drainage system — 128 miles of underground pipes, 4,000 catch basins and inlets, 2,200 stormwater manholes, and 76 “stormwater quality” facilities such as swales, not to mention 70 miles of ditches and channels. The whole system except the swales is designed to channel rainwater to the Willamette River.

The staff is telling the council that if it decides to go ahead with a stormwater user fee, it may take up to two years to develop the fee and put it in place. Why so long? Because it’s complicated.

In places that have a rain tax, such as Salem, the amount of the monthly amount added to the water/sewer bill varies with the amount of hard surface of each property. A single-family home in Salem will pay an extra $15-$18 per month once the fee is fully implemented in 2016. Bigger properties pay more. In a Salem comparison of stormwater charges per 100,000 square feet of impervious surface (like a supermarket roof or parking lot), the monthly charges range from $134 in Keizer and $199 in Corvallis to $435 in Eugene and $1,055 in Portland. We’re talking real money here.

The Albany staff has told the council that the city’s expenses for dealing with runoff will increase when, in 2016, the Department of Environmental Quality, acting on behalf of the Environmental Protection Agency, will require the city to take out a permit for its discharge of stormwater. And if permit requirements are not met, the city may be fined.

Citizens ought to question these increasingly costly requirements. What is their benefit? Salmon and other species in the Willamette system seem to be doing all right, judging by fish counts at Foster and elsewhere. So what’s the point of hitting the population with higher costs? And for the city, how wise is it to improve perfectly functional rural roads such as Crocker Lane in North Albany when doing so entails more rules and higher costs? Those roadside ditches have been handling runoff on their own, without any significant public cost, since the road was built decades ago. (hh)


35 responses to “Rain and tax talk arrive together”