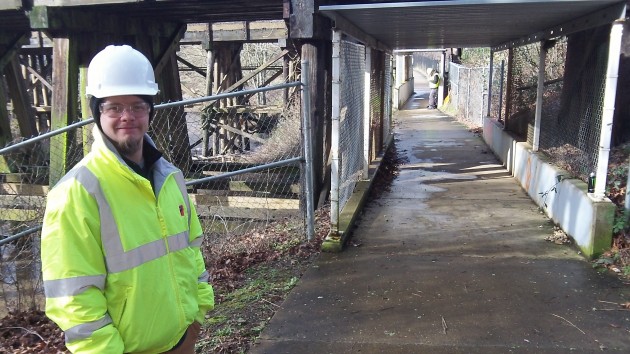 Mark Horton makes sure no one is under the bridge when work is done above. His colleague waits on the other side.

This is something you don’t see all that often: Flaggers keeping an eye on traffic where Albany’s Cox Creek Path ducks under the Union Pacific mainline.

Why would flaggers be manning a cycling and walking path? Because Union Pacific crews were working on the track, replacing worn cross ties. And in that work, apparently there’s a chance that ballast rocks could rain down and hit passersby underneath.

About a dozen pieces of equipment and their crews were working on the line in that area when I passed by on Sunday afternoon. As I understand it, they’ve been working their way north from Tangent for the last couple of weeks and are planning to continue toward Salem, where another crew already started on the same task.

Judging from what we’ve seen in the mid-valley, the Union Pacific is strong on track maintenance. A few years ago it spent tens of millions of dollars on replacing the mainline rails. And I was told the tie-replacement operation comes through every four or five years.

On Sunday, the railroad also had flaggers stationed at the surface street crossings in the neighborhood. Presumaby those guys had more occasion to flag somebody than the two men keeping a more or less lonely vigil on the Cox Creek Path. (hh) 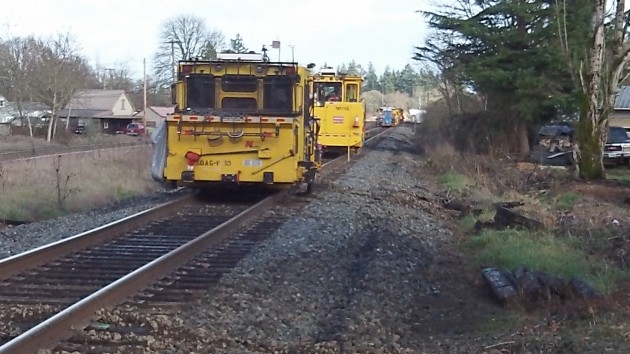 Maintenance equipment on the UP mainline east of the Burkhart Street crossing.