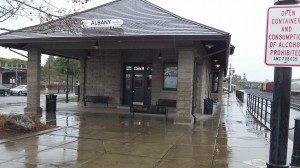 Albany Station, a hub for rail, bus and taxi connections in the mid-valley.

Some years ago Albany Station was renovated and expanded at considerable public expense, more than $10 million if memory serves, and it’s been getting steady use. Now there’s a chance it might be sidetracked in the planning for improved passenger rail service between Portland and Eugene.

The Oregon Passenger Rail Leadership Council meets in Salem on Dec. 11 to review alternatives for an improved passenger rail route up and down the Willamette Valley. The current route follows the Union Pacific main line, which goes through Albany. The trains of the Amtrak Cascades and Coast Starlight stop at Albany Station. So do several local and regional bus lines. Albany Mayor Sharon Konopa, a member of the leadership council reviewing the route alternatives, reports that it is still the goal of some to bypass Albany. This would run the route through Corvallis instead.

The main alternatives under discussion are to keep using the Union Pacific route or follow the route of the old Oregon Electric line, which runs down the valley west of the UP. Some also want to run passenger rail down the middle of Interstate 5. That doesn’t sound all that practical, frankly, but all three of those routes run through Albany now, so it’s hard to see how any sensible alternative could bypass the good old Hub City, so-called because last century rail lines radiated from it like the spokes of a wheel.

The goal of all this planning, supported by ODOT Rail and Governor Kitzhaber, is to prepare to ask for huge federal grants to build up Willamette Valley passenger rail into something resembling high-speed service. The cost would run into the billions of dollars, according to a previous study, so it’s unlikely that anything actually comes of it. Meanwhile, let’s appreciate the rail service and fine station facilities we have. (hh)