Rail solution around the corner

Once again waiting at the Queen Avenue railroad crossing in Albany last week, I was wondering — and who wouldn’t be? — about when the Portland & Western would finally begin to use its new track nearby. On Tuesday I got news from Kevin Haugh, the railroad’s general manager in Salem. And it sounded good. 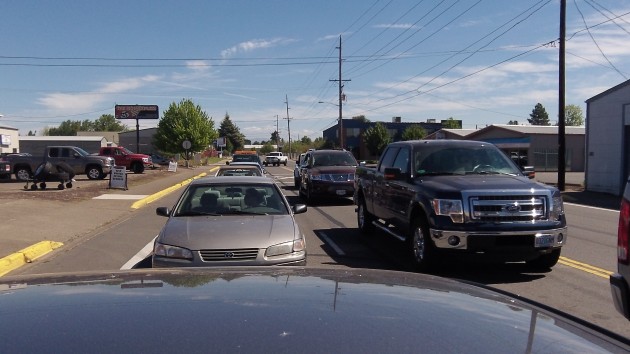 The wait on Queen Avenue can be pretty long, though this one wasn’t.

The new track is the Santiam Lead, a short section that enables PNWR freights to bypass the Union Pacific mainline on their way to and from the Millersburg yard and the Toledo Branch across the Willamette River. In 2009, the railroad and ODOT signed a $6,990,516 grant agreement under the ConnectOregon II program for the $8.7 million project to build the track and improve the Millersburg yard. Part of the idea was to shift more of the railroad’s train building from Albany to the Millersburg yard, thus reducing blockages of busy Queen Avenue.

After delays caused by unforeseen issues at the Millersburg yard and other complications, construction was finished this year, but trains have not yet used the new track or the reconstructed Albany Wye (the Y-shaped link between the Toledo Branch, the new track and the Albany yard). The railroad still needed to work out details such as central traffic control.

But on Tuesday, General Manager Haugh sent word: “We are doing a test early next week; then we will be putting it into service.”‘

When that happens, it should ease the railroad’s operations, and Albany motorists will see if the designed effect — fewer blockages on Queen — comes about. (hh)


5 responses to “Rail solution around the corner”