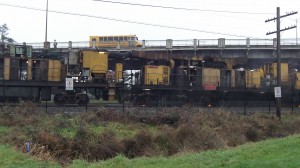 On the main line, a Union Pacific rail-grinding train passes under Albany’s viaduct on Thursday, Jan. 24.

A state committee working on plans for improved passenger rail between Eugene and Portland has been looking at different possibilities for a route that the trains of the future might take. You can’t  say that they have not been thorough.

It looks as as though they considered every possibility that somebody suggested. Keep in mind that there already is a fairly direct rail line between Eugene and Portland via Albany, Salem and Oregon City. It’s the Union Pacific main line that has existed for more than 100 years. But the committee, a “leadership council” appointed by Governor Kitzhaber, and their consultants have listened to lots of other suggestions from the public and various interest groups.

One proposed route would send the trains from Eugene west to Veneta and then around the west side of Fern Ridge Lake, via Corvallis and lesser metropolitan centers of such as Monroe,  Independence, McMinnville and Newberg. Another of the possibilties on the preliminary list called for tracks to be built down the middle of I-5 or next to it. Imagine the additional highway construction that would entail, not to mention the long tunnel needed to get through the hills south of Salem.

In all, there are four main corridor concepts, including following the old Oregon Electric along much of its route. On Thursday afternoon, Jan. 31, the leadership council will meet at the Salem Conference Center. It may recommend which of the concepts to move forward for more detailed analysis.

All this work, by the way, is hypothetical. Because of the astronomical costs and the federal government being broke, this improved rail corridor is unlikely ever to be built. But here’s a thought, just to speed things up: How about acknowledging that the railroad builders of the 19th century knew what they were doing? They picked a route down the Willamette Valley that worked for trains — pretty level the whole way and not too many curves. For the sake of moving the planning along, how about just following the existing main line and expanding its capacity with double tracking? That would be the simplest way to go. And the existing stations would not have to be moved. (hh)