If you want to waste four minutes of your life, check the video of this intersection, the only one in Albany where cameras watch for drivers running the yellow or red lights. You’ll see no violations during this short span, but during all of last year the cameras sprang to life more than 6,000 times.

This I learned after asking City Hall for data concerning the red-light cameras, which were briefly discussed during a city council work session last week.

What I wanted to know was this: How often did the cameras get activated by someone failing to obey a signal in 2017; how many tickets did this cause the city police to issue; what was the sum of the fines imposed on those tickets; what was the total actually collected, and how much did the city pay Reflex, the Arizona-based company that operates the cameras?

I thought all that information would be readily available in an annual report. But evidently there is no such report. So staffers started sifting through various records to come up with something.

Oregon has a new law on disclosing public records. What used to be a simple thing of reporters asking for information and somebody coughing it up is now formal. I was instructed to file a public records request, which I did last Thursday. On Monday I paid $8.10 as a public records fee and got the response to the first question of my request: The police department reported the cameras were activated 6,044 times.

As for tickets issued, I received a 19-page table listing them all, without a total, all of them for the same violation, “failure to obey a traffic control device.” If I counted them right, there were 1,027 of them during the year.

The table also showed the amount of the fine and costs imposed on each ticket, and the amount actually paid. Most drivers were fined $199 pus $61 in costs or fees, for a total of $260. But many paid a smaller fine. And some paid no fine at all but were assessed costs anyway. The costs, by the way, ranged from a low of $61 to a high of $165, all for the same violation. (For an explanation, see below.)

As for the total amounts of money imposed and collected, that’s still unanswered. I shied away from trying to add two columns of more than 1,000 entries each, and the table I received contained no sums.

The city did come up with tables showing what Albany paid Redflex for each month from January through November last year, the December invoice not yet having been processed. I added them up and came up with $24,650 for the 11 months.

Redflex gets $60 each for the first 50 tickets paid in full, and $50 each for any above that number. The company’s revenue started out slow with several months below $2,000 early in the year. But it finished strong with more than $3,000 in August and October and $3,400 in November.

You’ll notice that only about one in six camera activations actually results in the police deciding there’s a violation worth issuing a ticket for. Could it be those cameras and their sensors are a little too quick?

Municipal Court Judge Robert Scott told the council that 90 percent of the violations caught by the cameras involve making a right turn. So whatever the total the city takes in from the cameras, almost all of it is paid by people making right turns on yellow or red without coming to a complete stop first. Keep that in mind the next time you’re at Queen and Geary planning to turn right. (hh)

September Ridgeway, the city court supervisor, explained: “The fees and costs vary based on each individual case. If there is a fine imposed, there is a mandatory $45 fee to the state and $16 fee to the county. There is a $50 court cost if they fail to appear or respond to their court date. If they need to set up payment arrangements, there is a $15 installment fee. If they attend traffic school, there is a $75 court cost. If the Judge converts the citation to a court warning, he may impose court costs at his discretion. If they fail to pay and do not respond to the past due notice, there is a $20 fee and their license is suspended. The fees and costs can be a combination of any of these.” 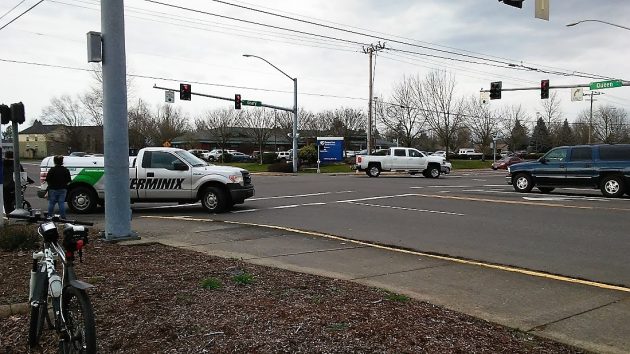 Traffic was light on Monday afternoon when this still was shot.

14 responses to “Queen & Geary: The numbers”