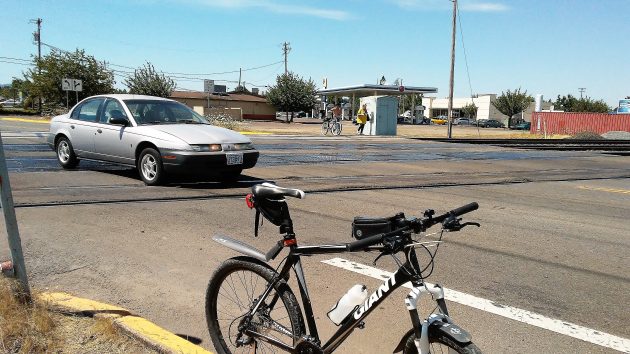 Albany’s busiest railroad crossing on Queen Avenue will be improved for safety one of these days. But it won’t be soon, and when it’s done it will still be a bumpy ride for cars.

ODOT-Rail wants to reconfigure the crossing gates to make it impossible to go around them when they’re down. This is to prevent fatalities of the kind that have happened there when people mistakenly thought the tracks were clear after one train had passed.

The original design for the project called for one of the westbound traffic lanes on Queen to be closed. But that idea has been dropped, and now traffic lanes would not be affected, city transportation analyst Ron Irish told the city council last week. But the project’s timing is uncertain.

I checked with Rick Shankle, manager of the crossing safety unit at ODOT’s Rail and Public Transit Division. He told me that the safety improvements “are a priority to us,” but before they can be done, the project must be added to ODOT’s State Transportation Improvement Plan. And before that can happen, it must be approved by the Oregon Transportation Commission. “Once it is in the STIP, official engineering can be initiated, which will include all of he federal required studies.”

Shankle has no timeline for when the project will be constructed. But with the various studies and approvals yet to be accomplished, my advice would be: Don’t hold your breath.

When the project was discussed with the council last year, the idea was that the Union Pacific and Portland & Western railroads would fix the bumpy street surface at the same time. (The UP has responsibility for its main line and passing track, the PNWR for the two yard tracks.)

But as Shankle explained it to me, the nature of the crossing — four tracks on a slight curve — makes it impossible to provide a totally level driving surface for cars and trucks. To provide adequate drainage, starting from the UP main line on the west side, each of the tracks has to be slightly higher than its neighbor to the east. And then, because of the curve, the outside rail has to be slightly higher than its mate.

Says Shankle: “Even after the project is completed, and the crossing is equipped with concrete panels through the four different tracks, the crossing will still have rough conditions. With the above noted design elements it is not possible to build a four-track crossing where the crossing surface is level from one side of the crossing to the other.”

Just another reason for drivers to avoid this crossing if they can, not just now but for as long as we still have cars and trains. (hh) 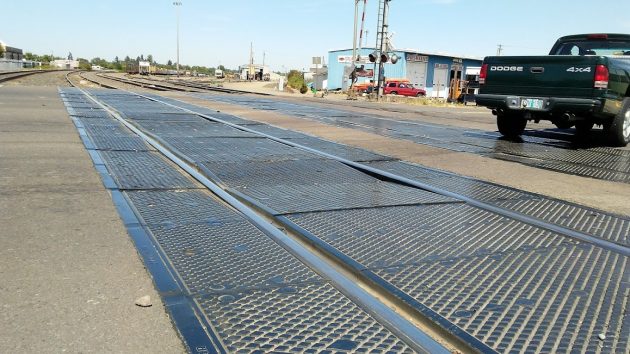 A closer view of track No. 2 at Queen Avenue, the UP’s passing track.