Albany’s Queen Avenue railroad crossing has long annoyed motorists because of the condition of the pavement and frequent delays. Now comes a new complaint: The length and volume of the air horn blasts of switch engine No. 1501.

Doug Hiddleson lives on Washington Street. Both his home and his automotive business are within a few yards of the tracks and the crossing. He understands the need for sounding the air horn and is fine with that — for obvious reasons of safety, and federal regulations too. But does the engineer of the yard engine have to sound the horn so loud and so long?

Hiddleson has talked to somebody at ODOT and also tried to reach the railroad about this. He has looked up the rules on train horns at crossings, and he’s convinced that whoever is driving No. 1501, especially on Thursdays, is overdoing it with the horn. He has video on his phone to back him up.

Passing freights also sound their horns, but their blasts are not nearly as penetrating, maybe partly because they are moving at a good clip while the switch engine creeps along very slowly. I too noticed the difference while standing at the crossing with Hiddleson on Wednesday afternoon.

One strange thing: The horn is intended to warn motorists that a train is approaching (as if the flashing red lights, clanging bells and lowered barrier arms are not enough). But when a train being switched backs up across the avenue, there’s no air horn at all. The horn sounds only when the engine, trailing the cars it is pushing, reaches the street.

Can anything be done about the blasts from No. 1501? We’ll see. In the meantime, two other issues are still unresolved: the bumpy and worsening condition of the crossing itself, and the lack of sidewalk gates, or indeed sidewalks.

ODOT has a plan to fix all that. The estimated cost was $1.3 million when the plan was approved in 2017 and slated for construction in 2020. Construction now has been pushed back to 2021. The project called for upgrading the signal system, improving all four sets of tracks with concrete panels in the roadway, repaving the approaches on Queen, and redoing the sidewalks to comply with the federal disabilities law.

City officials met with ODOT two weeks ago and plan more talks to explore whether and how to coordinate the crossing work with a scheduled city project to resurface part of Queen Avenue.

In other words, the crossing surface will continue to get worse for a while. And as far as I can tell, the state has given up trying to reduce the number of times the gates come down for switching operations, which ODOT said two years ago numbered 60 a day. Which is why many Albany motorists avoid that crossing if they can. (hh) 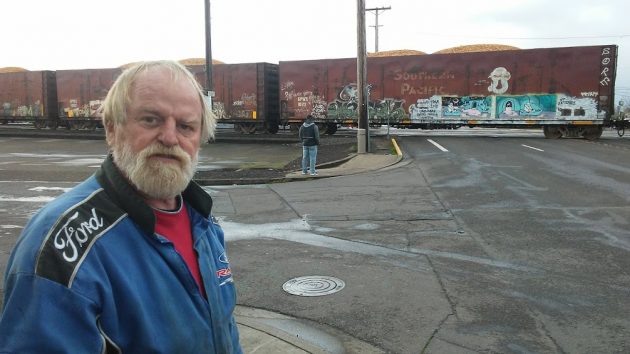 Doug Hiddleson has an issue with the length and volume of the air horn blasts of the Portland & Western’s yard engine No. 1501.