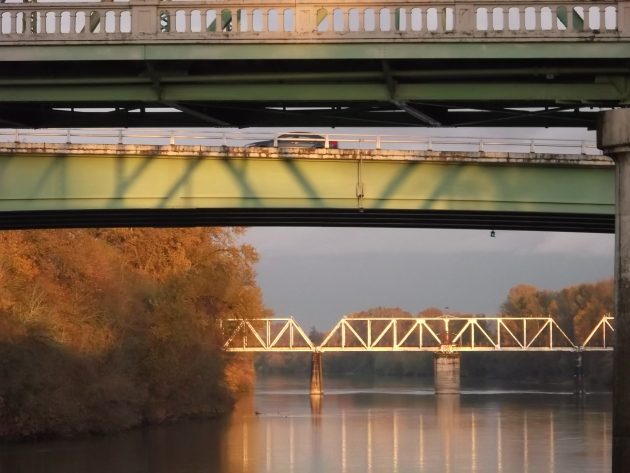 What if our bridges all fell down, as we’re told they might during a subduction zone earthquake?

The people studying the possibility of a massive earthquake destroying much of western Oregon now say it looks slightly more likely than before. So you’d think the state and local governments would be interested in doing more to help citizens survive when the Big One hits.

Researchers including Chris Goldfinger at Oregon State came out last week to say the chances of a major quake hitting the Oregon’s central coastal region in the next 50 years now are 15 to 20 percent, up from the previous estimate of between 14 and 17 percent.

You put in your ZIP code and you get estimates of damage and how long public services and everything else may be out of action. For 97321, seismically strong buildings and most houses built after 1970 should be mostly OK. But bridges may fail, highways may become unusable and underground utility systems are likely to rupture.

The standard advice is for every household to put aside two weeks of supplies per person, including food and water. But water and sewer service may be out for more than a year, electricity for two or three months, and health care facilities may be unable to work at normal levels for three years. So what good are two weeks of supplies after the two weeks are up?

If the electricity is out and the major highways are broken or blocked by fallen bridges, we’re not going to be able to buy gas or drive very far. So how useful is the other standard advice to have a “go bag” in the car?

The advice isn’t bad. We all should do what we can to prepare. But what we can do as individuals isn’t enough.

One appropriate reaction to the updated assessment of the quake’s likelihood would be to set up earthquake centers in each neighborhood, centers that can be reached on foot, where people could obtain basic supplies to help them survive. Neighbors could do this on their own, but how many actually will? City and county government help is needed on things like zoning, funding, organization, governance, and so forth.

Oregon and some local jurisdictions have been at pains to prepare for the effects of global warming, as though wetter winters and drier summers posed an immediate threat to anybody’s life, if indeed they occur. It would make far more sense to get going on a program to encourage or force the establishment of earthquake survival centers — just in case the science is right and Oregon hits on the Big One’s one-fifth probability over the next 50 years. (hh)