Puzzled by something at the Ellsworth Bridge 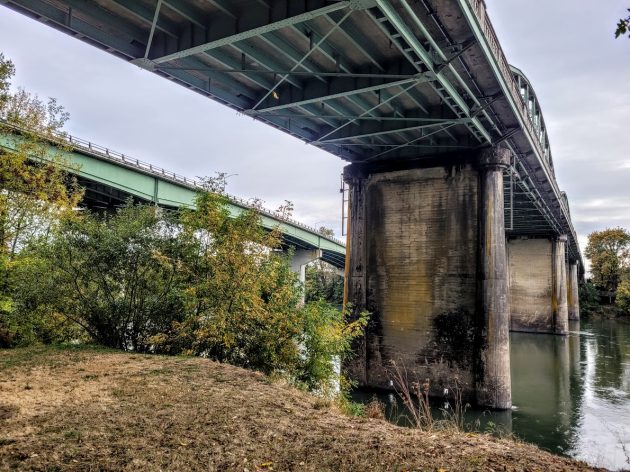 On a bike ride last weekend I found myself under the Albany bridges over the Willamette River. That’s when I noticed a structural detail I had not seen before, something I wish somebody could explain.

The concrete pier of the Ellsworth Street Bridge closest to the northern riverbank has a couple of rectangular holes near the bottom. On Oct. 30, when I saw them, they were close to the water line.

Pretty soon the river level will rise because of rain and releases from the dams upstream in the basin. Then the openings will disappear until next summer when the river drops again. 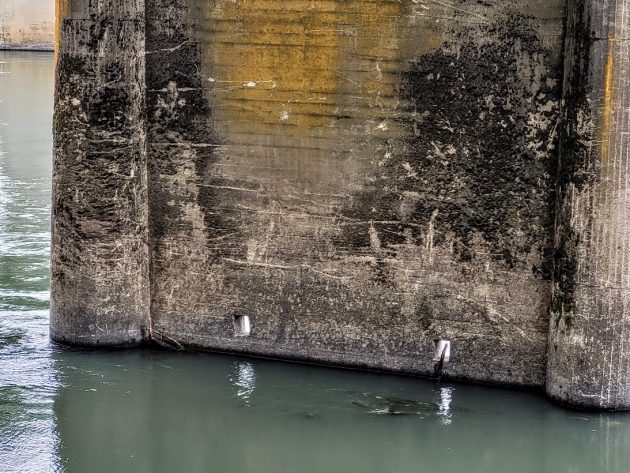 A closer look at the holes shows how thin the pier’s concrete wall is.

What, pray tell, are those holes for? I presume they were put there when the bridge was built. But why? What is their purpose?

The holes reveal that the pier is not as thick as you would think if you just looked at the ends. Maybe less than a foot? As far as I could tell, the other in-water piers don’t have holes like these.

Meanwhile, what else is new with this venerable bridge, designed by the team of legendary Oregon bridge engineer Conde Balcom McCullough and completed in 1925?

ODOT apparently is still planning to increase the clearance above the bridge deck from 14-feet-11-inches to 16 feet.

Over the years, the overhead beams have been hit several times by equipment being towed over the bridge. ODOT wants to lower the risk of that happening again.

On its website, the state transportation department says the clearance project’s design will take until 2023, and construction may take place late in ’23 or in 2024. (Nothing happens fast where ODOT is concerned.)

The design, by the way, is budgeted to cost around $736,000. Construction is estimated to cost $5.1 million, according to the website.

The holes in the pier don’t have anything to do with the clearance above the deck. But maybe, by the time they raise the beams, somebody will have told me what those mysterious holes are for. (hh)

And now … the answer. This story had been up less than a day when  ODOT spokeswoman Angela Beers-Seydel saw it and came back, via email, with this: “I saw your question about those holes. One of the ODOT divers (they do our underwater bridge and culvert inspections) says that the holes are from the construction form when the bridge was built. A lot of the older bridges were built this way.”


17 responses to “Puzzled by something at the Ellsworth Bridge”