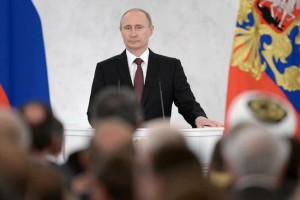 Putin’s press office used this photo to accompany the text of his speech on Crimea.

You can see why the Russians love their Putin. You can appreciate his domestic political appeal when you read the speech he gave in the Kremlin on Tuesday.

By Tuesday night, the first part of this oration by the president of the Russian Federation had been translated into English and posted online by the Presidential Press and Information Office (http://eng.kremlin.ru/news/6889).

Citizens love a leader who forcefully stands up for their own country, refuses to apologize for anything and instead attacks and makes sarcastic fun of his critics abroad. And Vladimir Putin certainly did that as he praised and defended the independence and then the annexation of the Crimean peninsula in Tuesday’s speech.

He went into some detail about Russia’s historical connection with the region, even citing Russian military victories there in centuries past. He talked at length about respecting ethnic minorities, especially the Crimean Tatars. He laughed at western invocations of international law in view of United States actions in Iraq, Afghanistan, Libya and other places in recent years.

He mocked the western powers for citing one set of rules when they supported independence for Kosovo and an opposite set now, when they oppose the action in Crimea. Putin said the West justified its Kosovo stand in favor of independence by citing the heavy death toll there. “This is not even double standards,” he complained. “This is amazing, primitive, blunt cynicism. One should not try so crudely to make everything suit their interests, calling the same thing white today and black tomorrow. According to this logic, we have to make sure every conflict leads to human losses.”

He was heavy on people’s right of self-determination. And for countries with lots of Russians in them, countries that used to be part of the Soviet Union, Putin’s speech contained ominous tones. Referring to the tumultuous time when the Soviet Union fell apart, Putin said, “Millions of people went to bed in one country and awoke in different ones, overnight becoming ethnic minorities in former Union republics, while the Russian nation became one of the biggest, if not the biggest ethnic group in the world to be divided by borders.”

Doesn’t this sound as though his ultimate aim is to erase those borders and unite the Russian people once again? He could do it as long as nobody opposes him. If the non-Russian people of the Baltic states are worried for their independence now, that may be the reason why. (hh)