Pursuit and shooting: The police statement 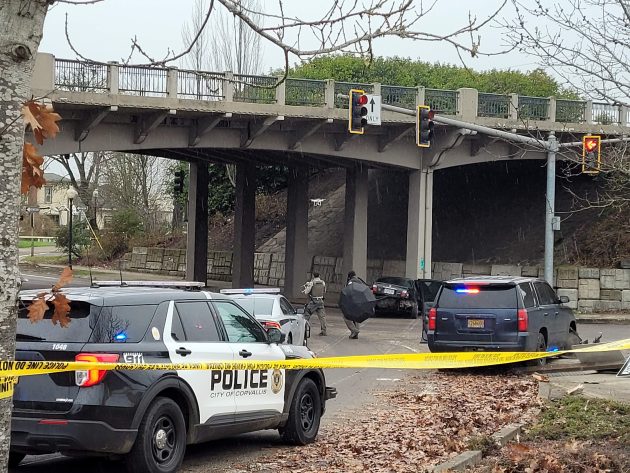 A scene from Monday’s investigation of the pursuit and shooting incident under the Pacific Boulevard viaduct.

The Albany police on Tuesday identified the driver of the car in Monday’s pursuit and shooting incident as Steven Anthony Schmidt-Shelton, 40, of Corvallis.

He’s in the Linn County Jail and faces seven charges ranging from attempted murder to failing to perform the duties of a driver.

The man’s mother went on Facebook and apologized for what her son had done.

Here’s the entire press release issued by the police department, with minor editing for style on capitalization, abbreviations and such:

“The suspect continued the pursuit into Albany and Oregon State Police utilized a forcible stopping technique on the suspect vehicle near the Albany train depot.  The pursuit ended under the Pacific Boulevard overpass where Oregon State troopers were involved in a shooting with the suspect.

“The suspect was apprehended and transported via ambulance to a local area hospital with non-life-threatening injuries.  No law enforcement personnel were injured during this incident. Detectives from the Linn and Benton County Major Crime Teams processed the scene of the shooting and opened the highways at about 10 p.m.

“The suspect, identified as 40-year-old Steven Anthony Schmidt-Shelton of Corvallis, was arrested and is lodged at the Linn County Jail on the following: Attempted murder, attempted assault 1, unlawful use of a weapon, felon in possession of a firearm, reckless endangering, reckless driving, (and) failure to perform duties of a driver.

“Members of the Linn-Benton Major Crimes Team were assembled, with Albdreany Police Departmensst leading the investigation of this incident. The investigation is ongoing and no further information is currently available.  All future media releases will be made by the Linn County District Attorney’s Office.”

In due course, we may learn details such as: How many troopers fired how many shots? How many shots were fired at the officers as they followed the fleeing driver? If the driver is a felon, as the charge says, how did he obtain a firearm? What kind of gun did he have or use?

And why do police statements usually refer to a “local area hospital” as in this case? It was Samaritan Albany General, so why not say that? (hh)


6 responses to “Pursuit and shooting: The police statement”