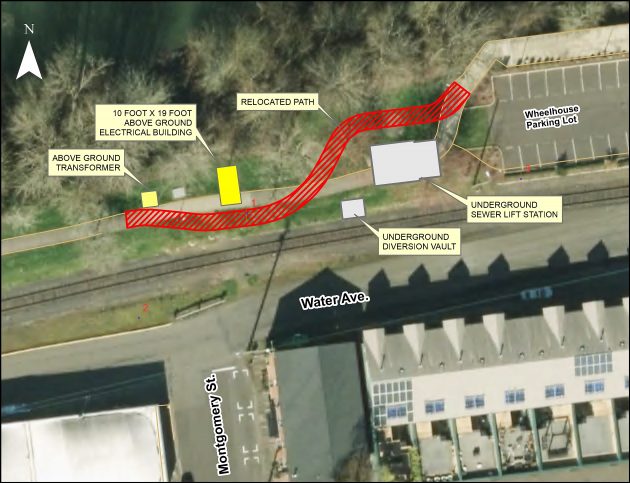 The site where the city intends to build an underground sewage lift station and an above-ground building for electrical gear. Iron Works townhouses are at bottom right.

Some Albany residents have become concerned about plans to build a sewer pump station on the Dave Clark Path near where they live in the Iron Works townhouses on Water Avenue. But the design is more than half done, and the city says changing it would cause delays and a significant increase in the cost.

The city staff discussed the project with the council in July 2017, noting that it would require rerouting a short section of the path. The pump or “lift” station is part of a big project to build a new sewer main along Water Avenue to take the load off the Riverfront Interceptor, Albany’s oldest and largest sewer main. The goal is to prevent overflows to the Willamette River during periods of heavy rain.

The council discussed the project again on Feb. 28, 2018, when it approved borrowing $13 million from the state Department of Environmental Quality to pay for it. The loan is for 20 years at 1 percent annual interest with a “0.5 percent fee on remaining principal” (whatever that means), requiring an annual debt payment of about $750,000 starting in 2020.

Last week, on Feb. 8, Courtney Minyard, a homeowner in the Iron Horse Townhouses on Water Avenue, published an appeal in Facebook’s “Albany Happenings” group, asking people to “ask questions, share your concerns and help me and my neighbors fight this location for the proposed pump house.” She said it would be an eyesore on the Clark Trail, create a barrier behind which vagrants could hide, and make for a “perfect tagging and drug hideaway.”

Albany hired West Yost Associates of Eugene to design the project, and City Engineer Staci Belcastro says the design now is about 60 percent complete. Construction is expected to begin late this spring or early summer.

Belcastro sent me the drawing that appears at the top of this story. The pump station itself will be underground, but there’s an above-ground building, measuring 10 by 19 feet with an inside height of 8 feet, to house electrical equipment. Belcastro says the electrical building will be designed to be consistent with other architecture in the area. (The Wheelhouse office building is to the east, and the original Albany Iron Works building and the townhouses lie across the street.)

“We are going to locate the electrical building just north of Montgomery Street,” Belcastro wrote, “approximately 150 feet west of the Iron Works townhouses so the building won’t impact their view.”

As for the Dave Clark biking and walking path itself, the drawing shows how it will be shifted to snake around the electrical building and the underground pump station.  But its users will no doubt have to take a detour, for a while at least, once the construction starts.(hh) 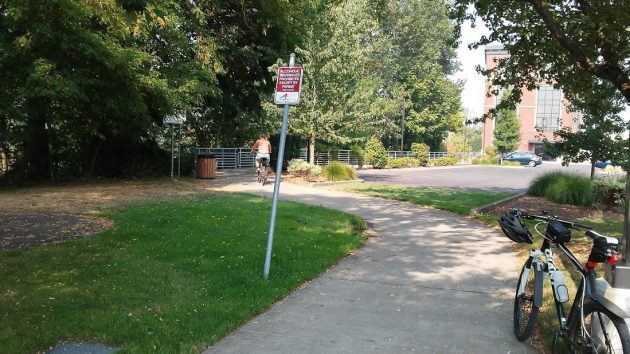 The site of the planned sewer pump station on the Clark Path. (I took the photo in August 2017.)