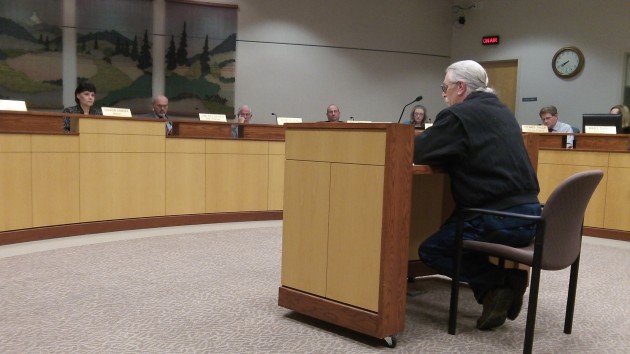 Jim Clausen talks Wednesday as the minutes add up on the council chamber clock.

It might be time for the Albany City Council to rethink the way it handles comments from the public during its regular meetings, which are held on two Wednesday nights a month at City Hall. Being open to public input is one thing. Prolonging meetings in order to accommodate long but irrelevant discourse is something else.

This week, the council spent 18 agonizing minutes listening to two speakers. One rambled on for almost 10 minutes about various things, from a corner market run by people from India to the water supply in Keizer. She wound up by asking for an interview with a city official and the mayor offered to meet her for coffee.

She was followed at the rostrum by Jim Clausen, a frequent presenter before the council and candidate for mayor in the last election. An applicant for appointment to a city advisory board had written he was interested in “social justice,” and Clausen regaled the council with quotations making the point that “social justice” is a meaningless term. Regardless of the merits of that point of view, is a council meeting the right place and time to bring it up?

“Business from the public” is a useful agenda item because it gives citizens a chance to speak to the council, in public, with comments being recorded and even televised, on things the council should hear. Is there a problem in the neighborhood? Complaints about a city program? Parks that need attention? Questions about a development? Has a citizen been mistreated? Or have city workers gone out of their way to solve a problem? Those are the kinds of things the council should hear about.

Screening speakers and their intended comments in advance would be wrong, and it’s impossible anyway. But how about a simple time limit? Three minutes per speaker ought to be enough. If the council wants to hear more, it can waive the limit. But as a rule, three minutes per person would make “business from the public” a much more workable tool. (hh)