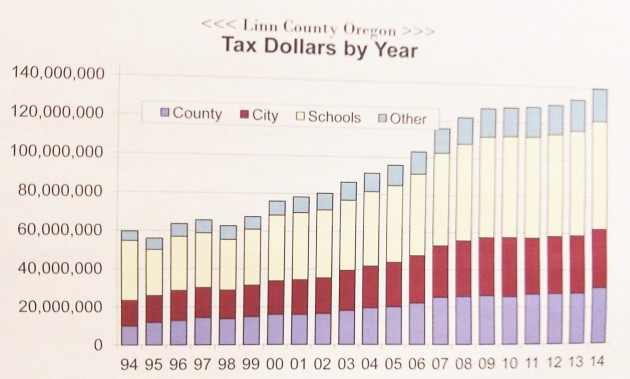 The assessor’s wall chart tells the story of the last 20 years.

Here’s a graphic it pays to keep in mind as the legislature in Salem considers various schemes to let property taxes rise faster than they have in recent years. The chart is posted on the wall of the Linn County Department of Assessment and Taxation. And as you can see, it tracks the almost uninterrupted growth in total property taxes imposed in the county, by all taxing districts together, since the 1990s.

The chart is instructive because we hear plenty of complaints from taxing districts. They complain mostly about compression, the revenue-reducing effect of the caps on aggregate tax rates imposed by the voters in 1990, in the form of Measure 5.

In Salem now, there is no shortage of proposals to loosen those restrictions. Just yesterday, more ideas along that line were filed. One would allow school districts to levy a local option tax of $2 per thousand dollars of assessed value, and this levy would be outside the cap on education taxes. This would avoid so-called compression of tax rates in order to fit under the cap of $5 per thousand for education.

Another proposal sounds as though it would exempt all local option levies from compression, meaning they would be unlimited in their effect of pushing tax rates up.

Changes like this would require amending the state constitution, so they would need the voters’ approval statewide. And local option levies themselves need the OK of local voters. But with a competent campaign, it’s not hard to persuade voters to approve incremental tax hikes, especially since you don’t have to pay the property tax in order to vote on raising it.

As the Linn chart shows, the property tax take in the county has more than doubled in 20 years, from about $60 million to nearly $140 million. And it has shown annual increases since1998. The increases are not out of line considering population growth and inflation. But you can bet that if the caps on tax rates are lifted, the annual jumps will be much higher from now on. (hh) 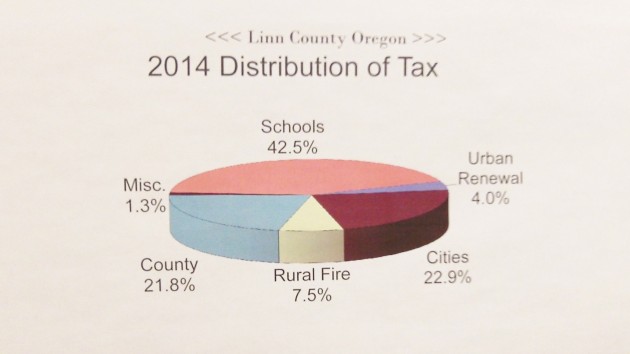 Another graph on the wall: Where the taxes went last year.