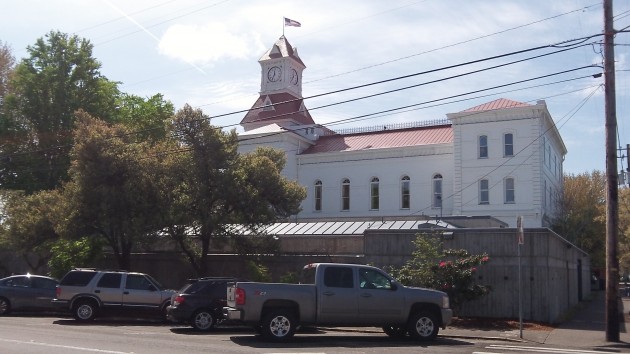 The low concrete fortress next to the Benton courthouse houses the jail.

Something is definitely screwy with Oregon’s election law and how it’s being enforced, and the news from Albany and Corvallis points this out. Free speech is the main issue, but so is the penchant by local government to try to affect the outcome when people are asked to vote on higher taxes.

On the one hand we have Albany, where the state elections office sought to fine the city manager $75 for merely having mentioned in a press release that a bond election was being held without also repeating how much the tax would cost. To his credit, the city attorney is fighting the fine on the grounds that the regulation on which it is based is a gross violation of the Oregon constitutional right to speak and write freely on “any subject whatever.” A hearing before an administrative law judge is scheduled in Salem on May 6.

On the other hand, in Corvallis the Benton County Board of Commissioners has just decided to hire a Eugene public relations firm to help lay the groundwork for passage of a likely jail construction bond measure in 2015. The Corvallis paper reports that the contract will cost at least $43,500 and, if extended to include additional work, may reach nearly $100,000.

What is that work? The county describes it as voter education. That’s fuzzy-speak for a campaign to pass a bond measure of probably $20 million or more to pay for a new Benton County jail.

So on the one hand it’s supposedly unlawful, according to the Elections Division, for a city manager merely to point out that an election is in progress, and on the other it’s OK for a local government to spend a pile of money to try to win passage of a bond measure. 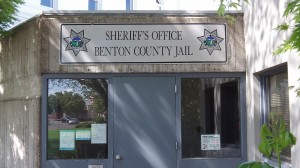 The public entrance of the Benton County Jail.

Now, to be fair, Benton County has not yet actually placed a measure on the ballot. But the commissioners anticipate doing so, because a new jail is obviously needed. With 40 bunks, the Benton lockup is far too small and the county spends about $1 million a year placing inmates in rented beds in other jails.

But if the need is that obvious, why spend scarce funds on a public relations effort to persuade voters? Especially in a county that doesn’t have enough money for road repairs and whose population likes to think of itself as generally richer, healthier and smarter than the rest of the state?

Public officials clearly have an obligation to inform the public about public needs, which an adequate Benton jail and Albany’s proposed new police headquarters and main fire station clearly are. Officials, elected and appointed, ought to be equally free to express themselves on issues such as these, especially when they are asked for information, but hiring PR professionals to soften up the electorate is going too far. (hh)