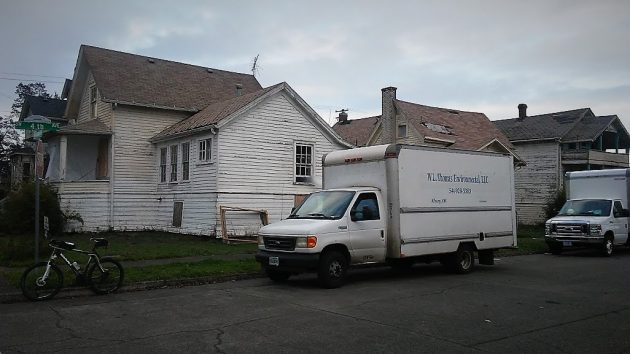 On Dec. 21, a crew from W.L. Thomas Environmental was finishing up the removal of asbestos in the three houses.

The proposed demolition of three old Albany houses remains hung up at the state Land Use Board of Appeals because of procedural objections by an opponent.

To refresh your memory, the city council voted 4-2 in October to let the owners raze the houses at Fourth and Calapooia three months later, hoping the delay would allow time for alternatives, such as moving at least one of the structures. Owners Mark and Tina Siegner posted signs offering to sell the houses for $1 for anyone who could move them by Jan. 11, 2019, the earliest date they could be demolished.

On Oct. 31, one day before the deadline, a Portland attorney for Albany resident Bernadette Niederer, whose online profile identified her as a vice president of the Monteith Historical Society, appealed the council’s decision to LUBA. The city responded by submitting a record of the decision, which after further procedural steps would eventually allow the board to reach a decision.

But on Dec. 12, Niederer’s lawyer, Carrie Richter, filed an objection to the record as submitted by Albany, claiming among other things that the minutes submitted were incomplete and some items had been improperly located or numbered in the paperwork. (That’s according to the person I reached at LUBA in Salem.)

Albany had 14 days to file a response. As of this morning, LUBA had not received any. LUBA has 60 days from the 12th to rule on the objection.

Once the Siegners determined that the decrepit houses they bought last February were too far gone to economically restore, they had hoped to replace them with new housing designed to be compatible with the Monteith Historic District in which they sit.

If the appeal had not been filed, the council decision would have allowed that process to start a little more than two weeks from now. As it is, there’s no telling what if anything will happen to that blighted site, or when. (hh)