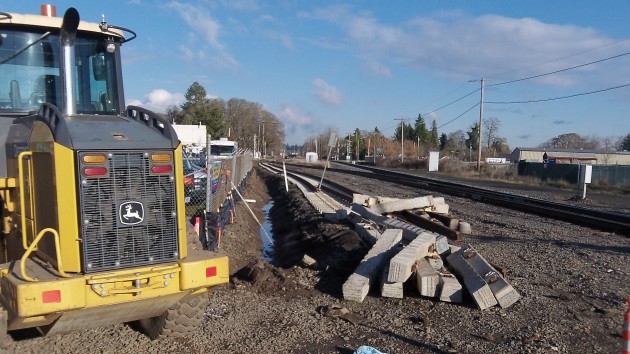 Ties are ready to be installed to carry the new line across Main Street. It will bypass the UP mainline at right.

Passersby can see that work has resumed on the so-called Santiam Lead, a stretch of new railroad track parallel to the Union Pacific Mainline in Albany. High time, too. Under an agreement between the Portland & Western Railroad and ODOT-Rail, the project is supposed to be completed by Dec. 31. Unless another extension has been worked out, the Portland & Western has three and a half weeks to complete the new track over a distance of about three city blocks, from just west of Santiam Road across Main Street to the Santiam Wye at Madison Street. Heavy equipment has been working at the site, and a survey crew from K&D Engineering of Albany was working at the Madison end on Tuesday.

ODOT said last summer that the project, funded under the ConnectOregon II program, had a budget of $8,738,195, of which 80 percent or $6,990,516 was coming from the state. The grant agreement was signed in June 2009, but complications delayed the work. They included slope stabilization problems at the Millersburg yard as well as new crossing signals at Madison. (It will be possible for two trains to cross Madison at the same time, instead of only one as now, and this requires more elaborate crossing protection.)

The project is intended to allow Portland & Western freights to reach the Millersburg yard from the Toledo Branch, the line from Corvallis, without having to enter the Union Pacific mainline in Albany. Once the connection is made, the railroad expects to move much of its train switching work from the Albany yard to Millersburg. This — and here we come to why the public cares — should cut down on the time the busy Queen Avenue crossing is blocked. (hh)