Price of gas, too, hinges on election 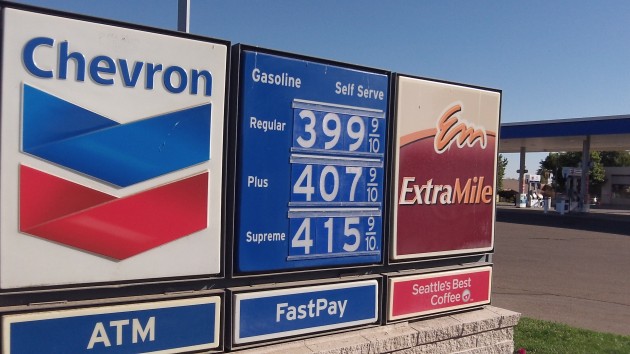 What travelers had to pay for gas in central California earlier this month.

We haven’t heard much about real issues in this Oregon election campaign, at least not from the ads. One point that has been mostly ignored is that Democrats plan to increase the price of motor fuel in the interest of arresting global warming, and the Republican candidates don’t.

Those are the positions of candidates for governor and the legislature, including the Albany-Corvallis Senate district. You’d think this would be of interest to voters, especially those who have to drive to and from work. At issue is the so-called clean fuels program, which Democrats rammed through the 2009 legislature but which is scheduled to sunset in 2015 unless it is affirmed,

The program is misnamed. It should be called the “pay more for gas program.” It calls for reducing the carbon content of fuel 10 percent, which translates to lowering its efficiency. That alone means fuel will cost more because it won’t go as far as the stuff we must buy now, adulterated with ethanol as it is.

California also has a program to lower carbon emissions, which is scheduled to be expanded to motor fuels next year. The media have started wondering what this is going to cost the average consumer. Nobody seems to know the cost, but it will be substantial.

“Based on input from various industry organizations and consumer groups, ” U.S. News and World Report said in September, “it’s estimated that the cap and trade ‘tax’ on carbon emissions has the potential to increase California’s retail gasoline prices from 16 cents to 76 cents per gallon. Most expect at least a 15-cent increase beginning in 2015.”

If the cost of Oregon’s program to consumers has been estimated or widely reported, I’m not aware of it. The few campaign ads on the subject have claimed that proponents of “clean fuel” are for saving the world while their opponents are in favor of pollution. In truth, the Democratic proponents follow the environmentalist dogma regardless of the cost, while their Republican opponents are being practical and want to save voters some money that they should not have to spend. (hh)


2 responses to “Price of gas, too, hinges on election”