Prettier streets, but at what cost? 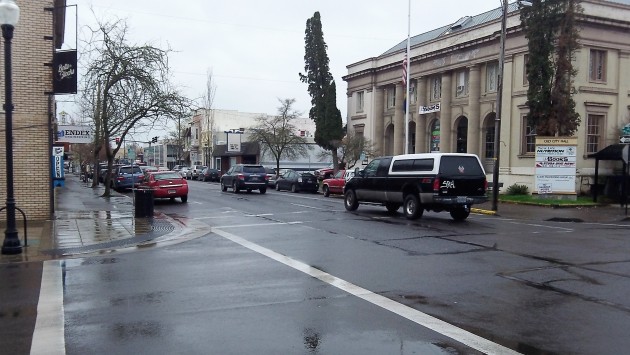 This and other intersections would get curb extensions. On the right, the old post office.

From the standpoint of visual excitement or esthetic appeal, the streets of downtown Albany don’t set any records. You might even say they look kind of drab, especially on a rainy day in March. The city wants to do something about this and is willing to spend nearly $8 million to get it done.

Or rather, to be precise, $7,879,000. That’s the upper limit of the budget for a streetscape improvement program the Central Albany Revitalization Area advisory board approved in January. (I was out of town at the time, enjoying long rides on the bike trails of sunny Orange County, so I ignored the money aspect of this decision till now. But the minutes for the Jan. 20 CARA board meeting, included with the agenda for the next meeting on Wednesday, reminded me.)

The program envisions new sidewalks and many other upgrades on Second and Third avenues and on Lyon, Ellsworth and Broadalbin streets.

Among the design details in the program approved by the board are curb extensions at all intersections. We used to call them bulbouts, and according to the program they will result in the loss of up to 33 parking spaces downtown, plus another 15 on Lyon and Ellsworth south of Fifth. The preliminary design calls for 24 of these bulbouts to be landscaped. Does this mean pedestrians will have to step around flower beds when they should be looking out for cars? (An update on the bulbouts is below.) 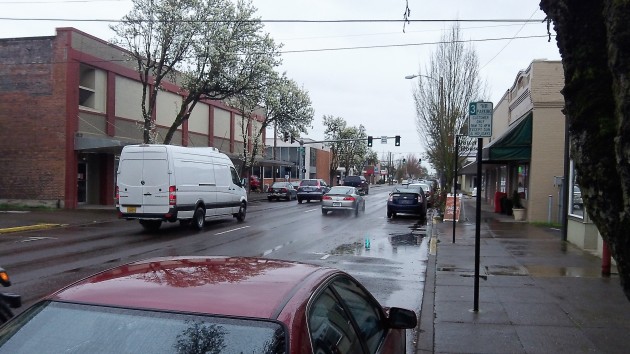 This part of Ellsworth would get vegetated landscape strip.

Lyon and Ellsworth are also to get $800,000 worth of vegetated landscape strips from First to Fifth. The sidewalks are not exactly extra wide as it is, so I’m wondering where these planter strips are supposed to go.

The plans call for new “acorn lighting” all around. As we’ve seen on First and elsewhere, street lamps of this kind don’t shed much light; decoration is what they are meant to provide.

All this is supposed to encourage a commercial revival similar to the proliferation of restaurants on First Avenue, where a similar sidewalk project was completed early in the last decade. But except for one block on Second, the rest of these blocks lack buildings suitable for a revival of that kind. The old post office and city hall? The new city hall? The city’s Two Rivers parking lot? Various banks?

And if streets adorned with acorn lights and benches, and intersections restricted with bulbouts, actually did prompt a private building boom on the adjacent lots, the sidewalks probably would have to be torn up again. So it might make sense to take another look at the extent and practicality of some of these upgrades before CARA actually borrows the money to carry them out. (hh)

Postscript: Staci Belcastro, a city engineer, says that design for the CARA street program is currently underway and construction should start in late spring or early summer 2017.

Second Postscript: Kate Porsche, in charge of the CARA administration, said in an email Tuesday that my reporting on the loss of parking spaces was incorrect and that the bulbouts were being designed so that hardly any spaces would be lost. That contradicts what the scope of the streetscape program said when, according to the minutes, it was approved on Jan. 20. We’ll see what happens when the final plans come out. (hh)


18 responses to “Prettier streets, but at what cost?”