Prepping for an Albany “rain tax” 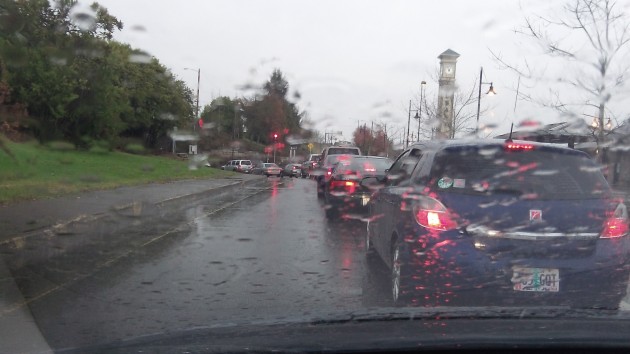 In Albany, 2015 may turn out to be the “Year of he Rain Tax.” At least it looks to me as though the city staff is preparing the council to accept the need for more money to deal with runoff during storms.

“Rain tax” is my shorthand for some kind of funding mechanism that would pay for an expanded program of managing the runoff when it rains, especially when it rains a lot all at once. By funding mechanism, I mean a fee. The city staff foreshadowed this last year when it got the council to approve, on a split vote, new standards and permits for storm water facilities on developments of an acre or more, along with requisite fees.

Now, starting with a work session Monday, the public works department is asking he council to subject itself to nearly monthly briefings on the ins and outs of storm water management, which is becoming more elaborate and complicated, will be helpful to prevent minor flooding, is required by the customary “state and federal regulations,” and will, of course, cost something extra. And when the briefings at last reach their conclusion near the end of 2015, the staff says it will have some recommendations on how to raise the money.

The council is likely to go along with this. After all, while some might see it as indoctrination, who can reasonably object to being fully informed? Members might want to ask some questions, though. What exactly are those state and federal rules we hear so much about? Chapter and verse, please. Where does it say in the Constitution that the federal government has any business worrying about what happens to rainwater in an Oregon town? And if the regulations are ignored, will the government arrest anybody or send troops?

Further, what exactly is lacking in the way the city handles runoff now? No one can truthfully claim that the Willamette River suffers great harm from Albany rainwater when, during big storms, it runs broad and muddy all the way from Eugene to Portland.

Questions like that notwithstanding, the council in all likelihood will go with the flow and pass the added costs along to residents and property owners. How? Maybe a monthly “storm utility fee” on every property in town. To me, “rain tax” has a better ring. (hh)

3 responses to “Prepping for an Albany “rain tax””