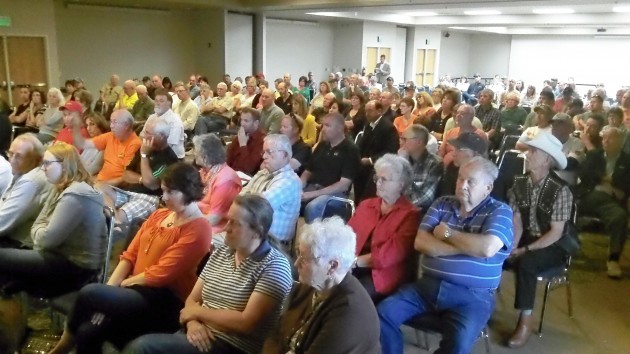 Part of the crowd at Tuesday’s hearing on the proposed Millersburg electric power takeover.

If the Millersburg City Council goes ahead and expels Pacific Power in favor of its own municipal electric company, it will be over substantial opposition from the town’s residents. That was my impression after Tuesday night’s public hearing at the Linn County Fair & Expo Center.

About 150 people showed up, by my estimate, maybe more, and from the audience reaction to those who spoke up, the prevailing mood on the power takeover seemed to range from skepticism to hostility. 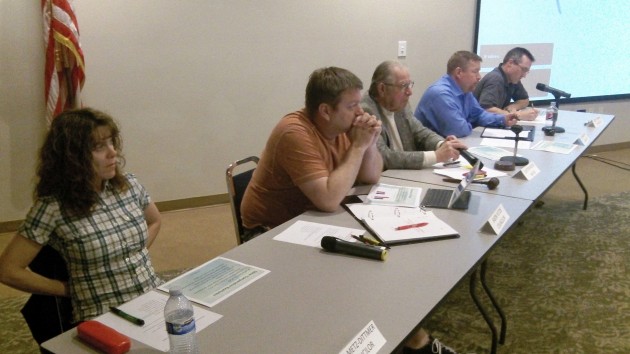 More than 30 people signed up to say something, and 20 actually stepped up to the podium to do so. Of the 17 who had no connection to the issue other than living in Millersburg, eight expressed their opposition to the power takeover and were mostly greeted with vigorous applause. Most of the others asked questions, and one was critical of Pacific Power for having said its Millersburg system was “not for sale.”

A couple of men asked about an election on the power issue or demanded to know why none was being held. City Councilman Darrin Lane said a decision on an election had not been made. Lane also said, answering other questions, that the idea of forming a municipal utility had been initiated by ATI Wah Chang but that taking that step was “not a done deal.”

The council heard again from consultant John Heberling of D. Hittle & Associates, whose feasibility study projected substantial savings for Millersburg power customers; and from Scott Bolton of Pacific Power, who said the study underestimated the takeover’s costs and thus overstated any savings to customers.

Jim Denham of Wah Chang also spoke. Among his points: Having a municipal utility would help economic development in Millersburg. And rates would be set by the city council rather than regulated by the Public Utility Commission, which he said is appointed and not accountable to the public.

Pacific has a new consultant’s report backing up its contention that the municipal takeover would be a bad deal for Millersburg. It estimates the acquisition and system-separations costs at more than $50 million rather than the $16.6 to $20.6 million estimated by Hittle.

Ninety percent of Millersburg power consumption is used by four industrial customers, and 70 percent by Wah Chang alone. The town’s fewer than 800 residential customers account for just 3 percent of power use. This proportion among customers would make Millersburg the most unusual public utility around, and if one of the industries left, residents would be left to pick up the cost of paying off the acquisition costs. A woman from the audience suggested making Wah Chang buy a bond guaranteeing the company would pay off its share of the cost if it closed.

Another public hearing is planned for June 19, also at the Expo Center in Albany. After Tuesday’s excellent turnout, it’s hard to believe another is necessary, but the council wants to give anyone unable to attend Tuesday another chance. (hh)