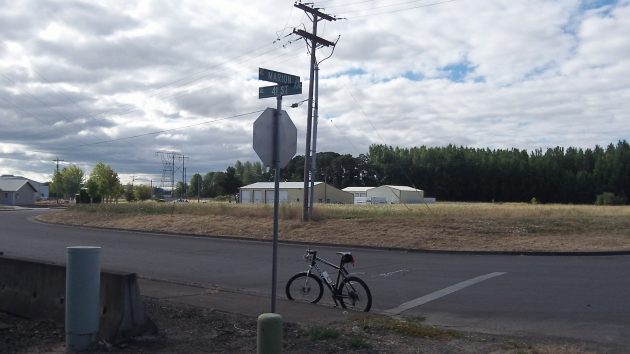 The corner of Marion Street and 41st Avenue could become Albany’s Cannabis Central under potential city regulations illustrated on maps handed to the city council Wednesday.

Albany is no closer to knowing where marijuana sellers and processors will be allowed if voters in November overturn the existing ban on commerce in recreational pot. The city council argued about it for a while Wednesday night but didn’t get anywhere.

Still, based on previous discussions showing what three council members and the mayor seemed to want, the city staff drew up a new set of maps showing where recreational producers, processors, wholesalers and retailers might set up shop. Under restrictive changes in the municipal code favored by the majority, one place where all those activities would be allowed would be around and west of the corner of 41st Avenue and Marion Street. It’s a sparsely developed tract of weedy vacant lots and a few industries and construction yards.

In addition to state restriction, a draft ordinance based on prior council discussions would ban recreational pot facilities within 300 feet of residential zones. It would also eliminate an exception from the 300-foot exclusion for facilities in industrial zones. Councilor Ray Kopczynski argued for less than 300 feet. Councilor Rich Kellum and Mayor Sharon Konopa defended the limit.

As planned and as required by law, the council Wednesday put its existing recreational pot business ban on the ballot in the Nov. 8 general election. It also enacted a 3 percent sales tax on recreational cannabis sales and put that on the ballot as well. The tax takes effect only if the voters overturn the ban.

Over the objections of Kopczynski and Dick Olsen, the council Wednesday completed a change in its rules to prevent any single councilor from blocking council action by abstaining. Under the change, an abstention will count as a no vote. The city charter says it takes four votes for the council to act and if there’s a 3-3 tie, the mayor gets to decide. Before the change, an abstention prevented a 3-3 tie. Last year, Kopczynski tried to block the marijuana ban by abstaining, but the ploy failed when Bill Coburn unexpectedly voted for the ban.

The council has been arguing over marijuana since before the 2014 state election that authorized recreational use and sales. City voters will put an end to some of that argument in November, but the debate about what’s a reasonable set of local restrictions is likely keep prolonging council sessions at least till then. (hh)