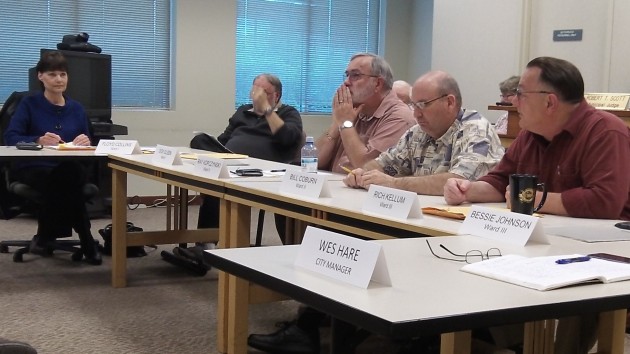 Albany Mayor Sharon Konopa is determined to keep marijuana shops — medical and otherwise — at least 300 feet from residential zones, and she seems to be counting on three council members to help her do that. What’s hard to see is how this matters much when starting July 1, all adults in Oregon will be entitled to grow a little pot of their own and keep small amounts for personal use.

At Monday’s work session of the city council, the mayor repeated earlier hints that she’d like to repeal a provision that allows “marijuana facilities” anywhere in Albany’s industrial zones. She would like to keep pot shops in industrial zones at least 300 feet away from neighborhoods, the same as in commercial and similar zones. And she believes she could get three council members to vote that way, giving her the chance to provide the fourth vote to carry the day.

This comes up because Canna Kitchen and Research LLC, a state-licensed dispensary on industrial property on Ferry Street, would like to move to a combination house-and-shop at 750 Sherman St. S.E., across the street from the American Legion and next door to a Chinese restaurant.

The current city code, amended last year, does not allow this because the property is within 300 feet of houses across Seventh Avenue. Rhea Graham, who operates Canna, asked the council again on Monday for a variance from the 300-foot exclusion zone. But the code does not allow for variances, and a change in the ordinance would be needed. That would take four votes, but only three councilors — Dick Olsen, Ray Kopcynski and Bill Coburn — would possibly vote for such a change. With the mayor opposed, that dooms the idea.

Konopa wants to do the opposite: Ban pot shops within 300 feet of residential areas in industrial zones as well. And if Councilors Floyd Collins, Bessie Johnson and Rich Kellum vote with her — as she seems to be counting on — that might close Canna Kitchen where it is on Ferry unless the council specifically exempts existing businesses from the enhanced ban. There was talk Monday of bringing this up again at a council meeting in June when all members are expected to be present.  (Johnson was away on Monday.)

All this talk about city regulation of marijuana may seem a bit overwrought in view of state Measure 91, passed last fall, which allows people to grow up to four marijuana plants on their property starting July 1, possess up to eight ounces of the stuff for personal use, carry up to an ounce on their person, and smoke it anywhere except in public places.

Meanwhile the Oregon Liquor Control Commission is drafting rules for licensing recreational marijuana stores, but those are not expected to open before the fall of 2016. The current legislature also is working on marjuana legislation, covering both medical and recreational pot and perhaps altering some of the provisions of Measure 91.

Canna Kitchen, by the way, does not sell marijuana. Instead it compounds ointments and such from pot brought in by people with medical marijuana cards. It’s a sedate little business, and it’s hard to see — for me anyway — how anybody could oppose it moving to Sherman and Seventh on objective grounds. (hh)