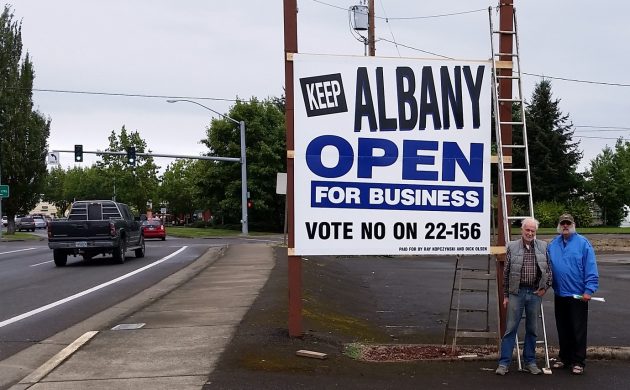 Councilman Ray Kopczynski, right, sent me this photo of him and Councilman Dick Olsen with one of the signs they put up.

An entrepreneur who has told Massachusetts regulators he wants to open an Oregon cannabis business has poured $50,000 into the Albany campaign to allow recreational marijuana commerce within the city.

Campaign finance filings by the “Keep Albany Open for Business” committee show contributions of $25,000 each from The Genetic Locker and Renaissance Solutions, two companies that occupy different suites at the same street address in an office park in Boulder, Colo. In a December 2015 filing with the Massachusetts Department of Public Health, one Christopher Woods is identified as the president and CEO of both companies.

In Massachusetts, a company named Odysseus Strategies, also headed by Woods as chief executive officer, applied for a certificate to operate a registered marijuana dispensary. The application says Woods has a 2005 bachelor of science degree from Pennsylvania State University and a 2009 master’s degree in applied mathematics from the University of Colorado.

The application says that in 2010 Woods founded the Genetic Locker, one of the first licensed medical marijuana dispensaries in Colorado. As its president, he oversaw a 2,000 percent increase in revenue since its start. He founded Renaissance Solutions in 2013. At the time of the filing, Renaissance managed one medical marijuana dispensary, three recreational marijuana stores, and four cannabis cultivation facilities in Colorado.

“Chris is also opening a medical marijuana dispensary in Oregon and intends to begin serving that patient population by October 2016,” the application says.

As of the latest filing with the Oregon Elections Division, the Albany committee campaigning to defeat the city’s ban on recreational pot businesses had received $51,150 in cash and had just under $26,000 left. Councilman Ray Kopczynski, who put in $1,000 of his own and founded the committee along with fellow council member Dick Olsen, told me Wednesday that most of the campaign cash would be spent on two large mailings, one when ballots come out and the other later.

Kopczynski said today it was his understanding that the sources of the $50,000 do want to open “something here.” But why they would concentrate on Albany rather than a bigger market was unknown.

One other wrinkle concerning the Nov. 8 election: Albany voters get to vote on whether to continue not just the city ban on recreational pot businesses but also on a similar ban imposed by Linn County. But the county measure, even though it may well be decided partly by Albany voters, has no effect inside the city. The same is true in regard to similar municipal bans also up for votes in Lebanon and other Linn County towns. (hh)