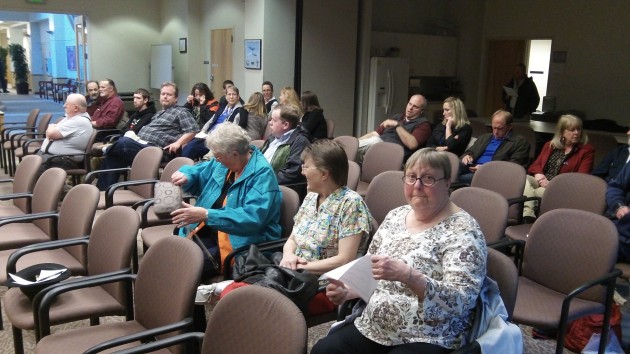 The audience at Wednesday’s council session. Only some were there for the marijuana decision,

Albany’s marijuana discussions may now be over for a while. At least that’s my hope after the city council Wednesday voted to allow two existing medical marijuana businesses to stay in existence. Councilors did so on a 3-3 tie, as expected, with Mayor Sharon Konopa casting the deciding vote.

State law allows registered medical marijuana dispensaries in industrial and commercial zones. Albany’s local ordinance, which took effect as soon as the mayor signed it, now says such places can’t be within 300 feet of any property zoned residential, mixed-use, office-professional or neighborhood-commercial, but this restriction does not apply to facilities in industrial zones. Two known medical marijuana businesses, Canna Kitchen on Ferry Street S.W. and Alternative Health Solutions on Pacific Boulevard S.E., are situated outside the restricted areas and can remain.

Councilors Ray Kopczynski, Dick Olsen and Bill Coburn passed the law with the mayor’s help. Councilors Rick Kellum, Floyd Collins and Bessie Johnson remained opposed because they would have preferred at least a temporary ban on all medical marijuana stores everywhere in town. Kellum had found a news report from Colorado saying that the number of cases of children being checked at emergency rooms after ingesting marijuana products had gone up after dispensaries became legal there in 2009.

Tom Cordier of North Albany told the council he was disappointed by the outcome. He said the dispensary backers were out of step with Albany and the voters would tell them so. “An election is coming,” Cordier said. “Look forward to it.”

Former Councilman Jeff Christman, an executive at Central Willamette Credit Union, told the council that financial institutions are affected by legalization of marijuana businesses: They must report to federal regulators any transaction they suspect is connected with federally controlled substances, and they must make sure any dispensary prevents children from getting marijuana. Oregon law requires that registered dispensaries keep minors out.

After months of discussion, one thing is now settled: People with state-issued medicall marijuana cards, legally entitled to buy and use the stuff for various ailments, will not have an additional burden placed on them. They can continue to buy the stuff, easily and legally, in town. Whether any other dispensaries can or will open up is unknown, but it’s unlikely considering the zoning and distance restrictions in the state and local laws. (hh)


One response to “Pot debate ends: Stores can stay”