Postal kiosk: Don’t count on it 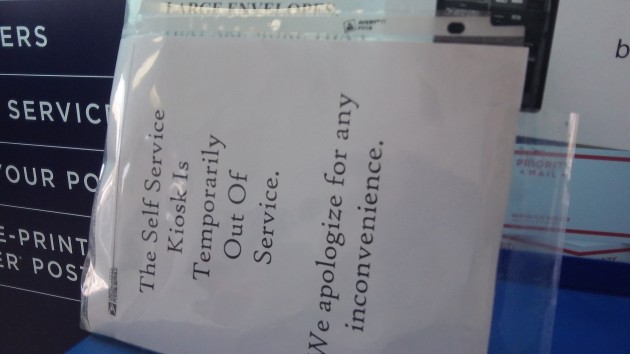 The sideways sign claims the self-service outage is temporary.

In early 2014 the inspector general of the U.S. Postal Service Office issued a report that the system’s 2,500 self-service kiosks were used not nearly as much as the service wanted. It blamed several factors including inconsistent signage and poor location in postal lobbies. In Albany, where the kiosk is placed where you cannot miss it, the more likely reason is that too often the machine does not work.

I’ve wanted to use the kiosk in the Albany Post Office lobby twice in recent weeks, both times when the office was closed. The first time, as I reported on June 25, the kiosk completed a debit card transaction but then refused to disgorge the postage. The second time, Tuesday night, I watched a guy try to mail something until he gave up.

The card reader would not read his card, and after he had tried several times and then put his card away and left, the screen still urged onlookers — me, by that time — to remove the card. 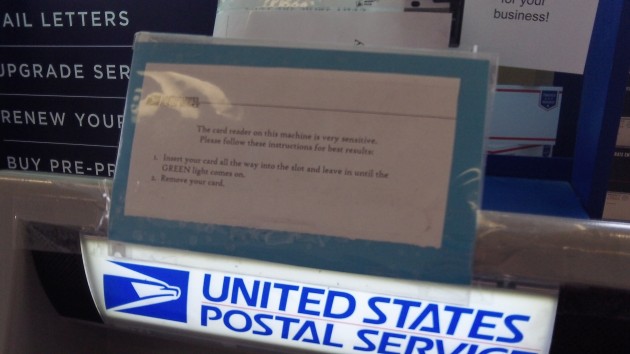 I took a closer look. There’s a sign warning customers that the card reader is very sensitive, and to leave the card in the slot until a green light comes on. Evidently the opposite is true. It’s not sensitive enough to sense and read a card that’s in the slot.

There was another sign, taped sideways at the top of the machine where customers would not see it right away. It announced that the thing was temporarily out of order. Temporary? As far as my experience goes, the kiosk struck out twice in a row.

Self-service kiosks seem to work flawlessly at the only other places where I often use them, at the bank and at the Albany Fred Meyer store. How come the Postal Service can’t manage the same?

As for that nationwide audit report, machine malfunctions were not one of the reasons cited for the less than expected usage rate of the 2,500 kiosks then deployed. But it’s hard to believe that Albany’s is the only one on which postal customers cannot rely. (hh)


7 responses to “Postal kiosk: Don’t count on it”