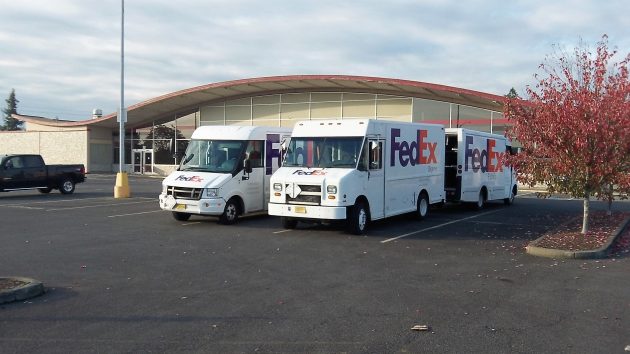 FedEx trucks huddle at the old Safeway building in this file shot from October 2015.

Empty business buildings around town were tossed around as possible locations if the city gets the Albany Post Office to move, and the former Safeway at Calapooia Street and Pacific Boulevard, with ample parking, emerged as the leading candidate.

The occasion for musing about moving the post office from its downtown block was Monday’s meeting of Mayor Sharon Konopa’s “Historic Properties Ad Hoc Work Group.” The panel thought it should come up with a number of potential sites before approaching the Postal Service about the possibility of moving.

Committee members think that the post office might be amenable to finding new quarters because its parking lot can’t handle the demand during some periods of the day, and parking in the vicinity is likely to get even harder when the Albany Carousel Building opens across First Avenue this summer.

The mayor said the Postal Service would probably want $1.1 million, roughly the value the Linn County assessor has assigned to the property, at 525 Second Avenue S.W. After leasing it since the 1960s, the service bought the square-block — between First and Second and Washington and Calapooia — in 2010 for $34,065. The former owners still owe about $15,000 in unpaid property taxes and interest from tax year 2010.

Safeway closed the store in 1999. For several years it kept its lease, but by 2015 the lease was off, and now the company no longer has anything to do with the building, owned by the Kampfer Family Limited Partnership, Harrisburg.

The site lies within the Central Albany Revitalization Area, raising the possibility that getting the post office to move there might involve the spending of urban renewal money — for buying the postal property plus fixing up the new quarters, which the committee seems to think the Postal Service would want to lease.

The city staff plans to search for other possible sites and also research the facility needs of other post offices of similar size before the next meeting of the mayor’s work group on April 24.

Also Monday, the panel narrowed to one or two the potential sites for moving the city-owned former Cumberland Presbyterian Church as a public meeting space available for rent. The leading site is city-owned property near Hackleman Park and the skatepark there. Also still in the running, but barely, is city-owned property within the Edgewater Village development off Water Avenue. The panel voted to discard Swanson Park as a possible site.

Committee members dropped the idea of going out once again for bids by private parties to buy the church and move or restore it.

Nobody has said so, but CARA also is likely to be tapped if the old church building is moved and restored. The costs would be upwards of $300,000. (hh) 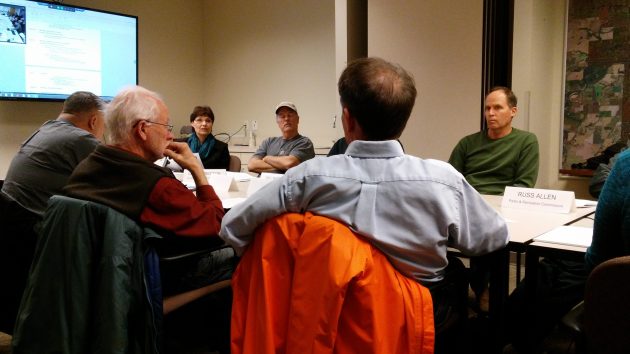 The mayor’s work group at work on Monday at City Hall.