Portable hoops: Code change is for them 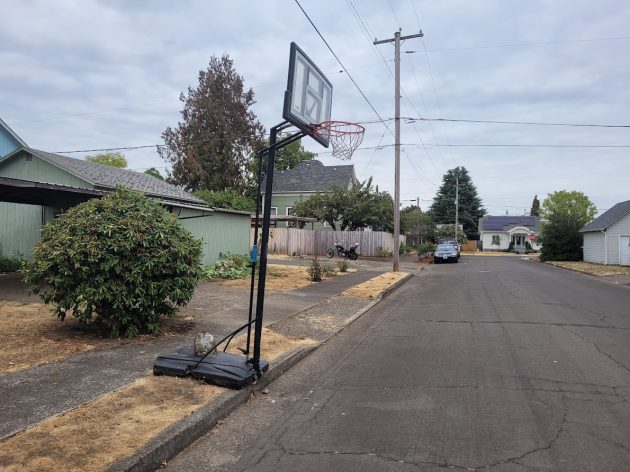 This hoop on Willetta Street is set up the way the proposed code says it should be, on the planter strip.

If you or your kids have a portable baskeball hoop on your street, you may be interested in a proposed new Albany law that says where these hoops should and should not be placed.

The subject of portable hoops in the streets came up nearly two years ago, in November 2020.  Kris Schendel, the code compliance officer attached to the Albany Police Department, told the city council then that he was working on an amendment to the city code.

Now the new code language is ready, part of a consolidation of many different provisions all relating to “community livability.” Schendel went through them all at the council’s work session Monday.

The council will be asked to adopt the changes later.

As for portable hoops in the public right of way, the proposed ordinance says they “shall not be placed upon any street, sidewalk, or bike lane.”

There are other provisions, all of them kind of common sense. Hoops should be at least 10 feet up and should not impede traffic, for instannce, and players in the street must yield if a vehicle comes along.

Most of the hoops I’ve seen lately don’t bother anyone and don’t interfere with anything, so they should be all right when this new language becomes law.

Councilwoman Marilyn Smith said she was glad the code change was coming. In her south Albany neighborhood, she had seen three portable hoops sitting on the sidewalk, making it hard or impossible for people in wheelchairs or pushing baby strollers to get past.

The draft of the ordinance acknowledges that shooting baskets is a good thing. The section on portable hoops is being added, it says, “to provide lawful recreation throughout city neighborhoods.” (hh)

The story has been edited to substitute a better illustration.


13 responses to “Portable hoops: Code change is for them”