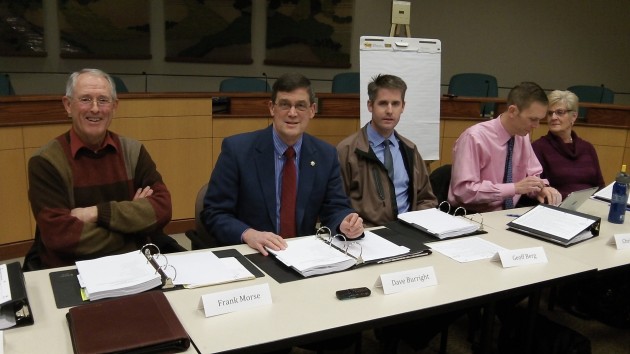 Frank Morse and Dave Burright (first and second from left in this photo from January) head the police/fire building panel.

For four months now, a committee of citizens has been reviewing Albany’s plans for a new police headquarters and downtown fire station. One way to keep track is to attend the meetings every other week or so, but that is tedious work as one recent session lasted more than two hours and didn’t break up till 9:30 at night. It is much more convenient to read the detailed and almost verbatim minutes, which now reflect a recommendation for a significant change in the city’s plans.

Information attached to the agenda of the meeting scheduled for May 7 reflects the panel’s recommendation to remodel the police headquarters where it is, next to the Linn County Jail on Jackson Street, if enough property can be acquired to expand it there. This is a big step because it would remove one of the arguments by opponents that helped kill a combined fire-police bond issue last fall.

The objection was to relocating the police to a now-vacant parcel on the west side of Pacific Boulevard north of 29th Avenue. The city bought the land in 2009 for $860,000. But Police Chief Mario Lattanzio says the department would rather stay where it has been since 1988 if the building, much too cramped by now for a force that has almost doubled since the ’80s, can be enlarged. 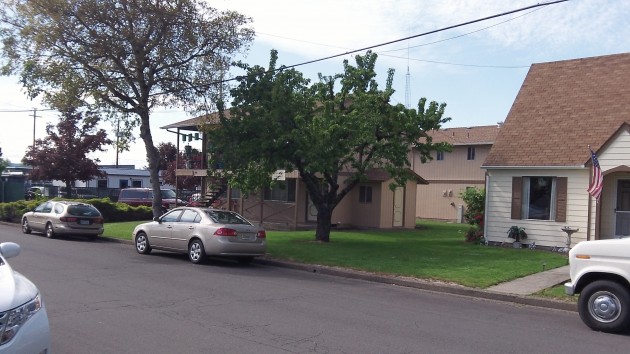 Apartments and a house behind the police station. The trailer in the left background houses the detectives.

Lattanzio gave the panel, the Public Safety Facilities Review Committee, a lot of information to back up his idea, including data on surrounding properties and their tax valuations. The committee now wants the city to negotiate the purchase of the properties behind the station — from 13th Avenue north to the jail, and from the police station east to Thurston Street

But just in case that proves impossible, the panel also wants the city to petition the Oregon Department of Transportation for a permit to access the other site from the Pacific Boulevard (Highway 99E). At present, access to the site is via 29th and a segment of Willetta Street lined by medical offices on one side and homes on the other.

For logistical reasons alone, it makes good sense to remodel and expand the police station where it is, adjacent to the sheriff’s office and the jail. And now that this is a possibility, the idea of opening yet another driveway on Highway 99E, especially within a block of the signal at 29th, ought to be discouraged. Because of the often heavy traffic, making a left on to high-speed Pacific is not recommended without the help of a light. (hh)