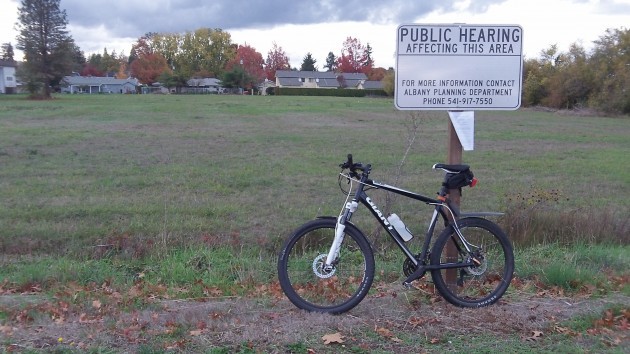 The Albany police station site off Pacific the way it looked last October.

Albany taxpayers are about to pay the city of Eugene $164,307 for the restoration of wetlands there. Why? Because of state and federal rules that make no practical sense at all.

You may recall that Albany is about to start building a new police headquarters on 3.9 acres of vacant land on Pacific Boulevard, and that the Oregon Department of State Lands last year determined that more than half the site consists of wetlands.

Before construction can start, the city needs a wetland permit from the state and the Army Corps of Engineers. To get the permit, Albany must buy “credits” in a wetlands bank. This means the city must make up the loss of wetlands on the Albany site by contributing to new or improved wetlands somewhere else.

Since 2006, the Eugene parks department has been working to turn a 240-acre grass seed field in the Coyote Creek drainage west of Eugene into a proper wetland, and it has a “wetlands mitigation bank,” the Coyote Prairie North Wetland Mitigation Bank, that can sell “credits” in that project to developers up and down the Willamette Valley.

Now, the Albany City Council on Wednesday will approve — because it has no choice — sending Eugene $164,307. That’s the price of credits covering 2.86 acres of alleged wetlands that will be lost on the police site. The money comes from the police project fund, for which Albany voters approved an $18 million bond issue that will be paid off from property taxes.

True wetlands are an important part of nature and worth preserving. They store water and reduce wintertime flooding. They harbor all kinds of specialized plants and provide a home to wildlife from salamanders to birds. But those benefits are tied to the particular place. If a wetland is useful in storing runoff, that benefit is lost when the site is paved over. And what good does it do that place to recreate a wetland 40 miles away?

The wetland expense in this case is a small fraction of the cost of building a new police station. But it is still an expense for which Albany taxpayers will be billed for the life of the bonds even though it does them no good at all. (hh)