If a drone buzzing over your property is making you mad, you don’t have to take it. According to advice the Albany City Council got Monday, you can call the cops and ask them to investigate.

Councilwoman Bessie Johnson had heard from a couple living in the Deerfield area of southeast Albany. Apparently somebody had been sending a drone over or near their property, upsetting their dogs, and the police told them there was nothing that could be done.

But there is, Assistant City Attorney Joseph Allison told the council. While the legislature has preempted the field of drone regulation, keeping cities from making additional rules, Oregon has laws prohibiting drone operations that annoy people on the ground, or that are reckless. Another state law prohibits an invasion of personal privacy.

Allison told the council that police could cite drone operators under those statutes. As the city’s prosecutor, he’ll talk to the APD about additional training on the subject of drones and the law.

Chuck Perino, Albany’s city emergency manager and safety officer, briefed the council on Albany’s policy on operating city-owned drones. No video of persons or anything that could be an intrusion on people’s privacy is allowed. Employees trained as drone pilots sometimes use the unmanned aerial vehicles as part of their city work.

As you can see in the video above, Perino brought along one of the city’s drones, and for a few seconds he flew it in the council chambers.

Probably the best advice for drone operators: Read up on federal regulations and state laws, and take care not to make your neighbors mad. (hh) 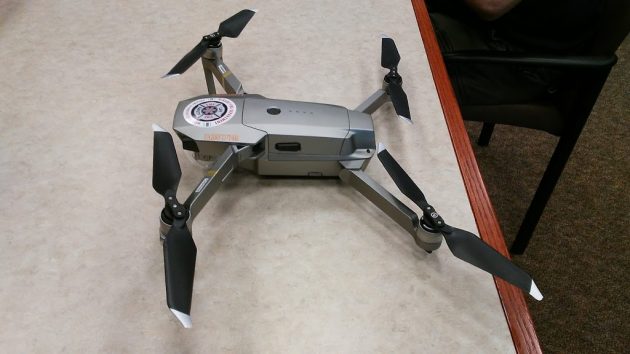 A drone used by the Albany Fire Department sits in the council chambers Monday.

9 responses to “Police can cite people for drone offenses”